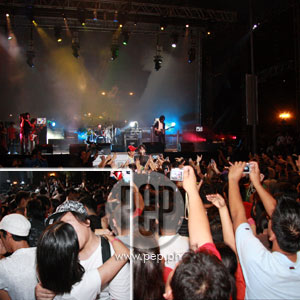 Love, kisses, and rock bands once again marked this year's Lovapalooza. The annual mass-kissing event was staged at the Seaside Boulevard of the SM Mall of Asia last February 14.

The Seaside Boulevard of the SM Mall of Asia in Pasay City witnessed the annual kissing festival popularly known worldwide as the Lovapalooza, which is now on its fifth year.

Toothpaste brand Close Up and MTV Philippines joined hands to celebrate the occasion through a night of love, music, kiss, kiss and more kisses. Although no Guiness World Record is at stake, couples trooped to the venue as early as four in the afternoon and eagerly stayed on until late evening.

Performers for the evening were Bamboo, Rico Blanco, Sponge Cola and Pupil. Embellishing the bands' music with its lush string arrangement was the Metro Philharmonic Orchestra, perfectly setting the evening's mood for romance.

Close Up and MTV representatives and the program hosts gathered at around nine in the evening to signal the highlight of the evening. With fireworks lighting up the evening sky and Sponge Cola delivering the theme song, "Closer You and I," couples simultaneously locked lips to observe Hearts Day.

Lovapalooza was first held in the Philippines in 2004 at Baywalk, Roxas Boulevard in Manila where a total of 5,374 couples kissed to break the mass-kissing record set by Chile.

In 2005, more participants came from Manila, Cebu, Angeles and Davao. All efforts unfortunately went to waste as Hungary—bolstered by 5,875 couples—reclaimed the record on June 25.

The Philippines regained the record in 2007 after a whopping 6,124 couples showed up in Pasay to break Hungary's previous victory.