Camille Prats keeps herself busy with own pre-school 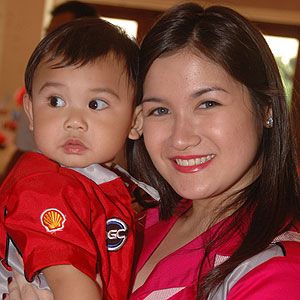 Despite the stress, it was obvious that the 23-year-old mom was enjoying the Cars themed party of her first son with husband Anthony Linsangan.

Camille, who managed everything that was needed for this party, said that a lot has changed in her life since Nathan came.

In fact, she related to PEP, "Nandiyan 'yong napupuyat ka sa gabi, hindi ka puwedeng gumising ng tanghali. I have to wake up earlier than usual kasi I have to make sure that before I go to school, naayos na siya—nakaligo na siya, natutulog na siya. 'Tapos, from the time na gigising naman siya, babalik naman ako kasi hahanapin ako. So, sometimes I bring him to school.

Although she bid goodbye to singlehood at an early age, Camille did not have any regrets especially when she started to become a mom. She even described her experience as a mother, "Masaya. Masaya siguro dahil I see it as a very wonderful blessing. Siguro dumating siya [Nathan] nang maaga sa buhay ko... He came to me as a surprise but otherwise I'm very happy and I'm very blessed."

BUSY WITH PRE-SCHOOL. After giving birth last year, Camille devoted most of her time not only to Nathan, but also to her newly found career, as a businesswoman who built the pre-school named Divine Angels Montessori. (Click here to read related article )

She clarified that she does not teach at the school. Camille explained, "Sometimes I sit in. But I really can't teach, e. Kailangan, para magturo ka, you have to have a license, di ba? Actually, before naging issue nga 'yon? Bakit daw ako nagtuturo, e, hindi naman ako teacher. That's the Montessori course kasi that I took para 'yon ang i-apply doon sa school but I'm not really teaching.

Camille said that it was really her intention to venture into something other than show business.

But when will her fans see her again on television?