Robert Seña and Isay Alvarez: The "complete package" on and off the stage 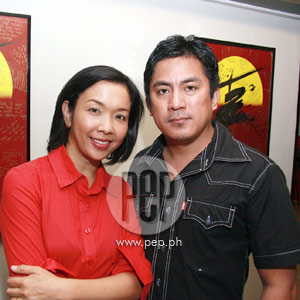 Over here, they were magbarkada. And then in London, they became mag-asawa. The two posters behind Isay Alvarez and Robert Seña helped them realize that they were meant for each other. Click here for more love stories in PEP'S LOVE MONTH SPECIAL.

They started out as magbarkada.

Isay Alvarez was already making a name for herself in TV entertainment. Remember Ate Isay or Ate Gigi in Batibot?

Robert Seña, on the other hand, was studying at the University of Sto. Tomas (UST), and then became a rock-band vocalist and budding stage actor.

It was theater which brought the two of them together. Isay and Robert got the chance to work in the musical Magsimula Ka.

The first time Isay felt there was something more than friendship between them was before they left for London about 20 years ago. But she hastily discarded any romantic notion.

"Even before we left, niloloko niya ako, but I would take it aside kasi nga, barkada kami, so nagagalit pa nga ako 'pag niloloko ako," the UST alumna told PEP (Philippine Entertainment Portal).

But as it turned out, The Engineer/Thuy of Miss Saigon's original cast was serious about pursuing Gigi, Isay's role.

From there, Isay realized, "I got to know him, yung different Robert...Kasi alam ko siyang Robert as barkada, hindi yung Robert as another person."

LOVE IN LONDON. Robert and Isay got married there and she returned to the Philippines. Then managed to carry on a long-distance marriage before Robert decided to make Manila his permanent place of work.

Isay's long story went, "We got married there,then we went home first—me and the kids—because I thought hindi good for the kids yung environment ng England. It was difficult to raise kids there so we thought of coming home.

"Robert stayed [in London], and then he [came] home. He did an album, [but] he couldn't take it here, parang you know, culture shock—different ang work ethics and everything...So he went to do Miss Saigon in Germany.

"I was supposed to, [but] I've decided not to do it. I stayed home, and then after a while, he went to London so it was a long distance and very expensive relationship—going there and the long distance calls—very expensive. And we decided it's not worth it, so he came home, we started here."

LIFE IN MANILA. The former lounge singer did not have a hard time resuming her showbiz career, but not so for her husband, who had started his professional theater career in London.

Isay explained, "I was able to start good during my time, sa kanya it was not easy, parang kailangang tiyagain."

Robert said he saw the big difference between Manila and West End right away.

He discussed the actor's attitude towards his work, "Doon [West End], profession nila talaga 'yon, binabayaran sila, umaarte sila. They have to be disciplined. Here siguro, the difference [is] hindi nadadala yung ethics even on stage."

He observed that talent fees are not as financially rewarding here. "Doon kasi, binabayaran ka nang tama kaya maayos dapat trabaho. You have to be there on time, otherwise, the director will get mad."

SHARED PASSION. Robert and Isay's passion for acting brought them into showbiz.

She and Robert also had roles in La Visa Loca, Shake Rattle & Roll 8, and indie films.

The husband compared acting on screen versus stage performance.

The singing duo also became very visible on the concert scene as performers and producers, and got busy with recording. Two years ago, they released Dueto, which featured Filipino classics.

But these days, corporate shows are their "bread and butter." Plus, they have Spotlight Artists Centre, their school for people who're interested in acting, singing and performing. Click here to read related story.

Robert told PEP, "Sometimes I host, she sings. Sometimes I direct, and she's my singer, yung gano'n. 'Tapos sometimes, we will do a song medley and then we'll do hosting and magkasama pa kami."

Keeping a stable relationship may be a difficult thing to do in showbiz, but Isay sees it as quite an advantage.

"We have so many things in common," she said. "We enjoy watching movies together, we enjoy watching plays and musicals. We would scrimp and save to go to Broadway to watch musicals and plays with the kids, so it's something to look forward to do."

Having shared passion makes things easier for them, especially in understanding the demands of each other's work.

Isay related: "Siguro in the beginning it was difficult kasi, like for example, si Robert is very intense, intense ang kanyang treatment if he is doing a character role.

"I am also intense and I'll tell him to buzz off, because you know, I am concentrating on this... [But] alam na namin yung parameters na yun na, I'm trying to concentrate, I'm trying to learn my script.

"And it also helps, for example, he would tell me na, "Maybe you should do this, ganyan..." We watch out for each other, and I would tell him the same."

SHARE OF LQs. But of course, just like any other couple, they sometimes argue and get into a lovers' quarrel.

Before, Isay would fret about Robert's nights out. "Things like that...He likes to going out with friends, I'm not so fond of that," she said nonchalantly. "Alam mo, there are things that he likes but I don't like, but its okay..."

Robert cited a minor grouse. For him, Isay is not only his wife but also his manager.

"Sometimes ako, ime-memorize ko na lang yung spiel the day itself, mas mabilis ako minsan sa gano'n...For example, it's already 12:00 o'clock and I was just watching DVD, and she would start as parang ano, manager, 'O, you have to do your lines...You haven't studied yet...Have you heard the song na...' And I would say, 'Just studied the song, leave me alone.'

"There are times I don't know that I have to do this project, but she agreed already, hmmm parang little things..."

"Little things" which had long been discussed and addressed by the couple. As Isay mentioned, "We've already found a way to accept things about each other, so it's not an issue anymore, you know what I mean?"

Robert seconded, "Somehow, through the years of being together, we learned how to give ourselves space."He added, half-serious, half-amused: "Pag wala kayong attachment nung ano, manager mo or yung road manager mo, naghihiwalay kayo [pag-uwi]...You have your own time in your house, di ba?"

Were there times when personal problems intruded their professional life?

The former rock-band vocalist answered, "You know what, through songs, parang nagiging...Nagbabati kami on stage. Like, because of a certain song...Halimbawa, LQ kami, then we're gonna sing 'The Prayer,' of course, dapat magbati kami, di ba?"

The magbarkada brought together by their love for performing, have been basking in the joys of shared values and passions. They have weathered mild storms in their married life for 17 years now.

"It's a blessing actually...We call it, 'package na,'" ended Robert.