Love Teams Through the Ages 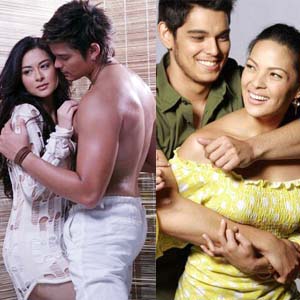 Two of the most popular love teams nowadays are the tandems of Marian Rivera and Dingdong Dantes (left), and KC Concepcion and Richard Gutierrez. Just like the love teams that came before them, the Marian-Dingdong and KC-Richard love teams will be remembered as representatives of an era and a generation of fans in Philippine show business. More reel and real-life couples and their love stories in PEP's LOVE Mo

These onscreen partners in turn become unforgettable icons of each era in Philippine show business. Representatives of generations of movie fans.

Here are some of the most unforgettable love teams from each decade in movies and television.

ROSA DEL ROSARIO & LEOPOLDO SALCEDO. Although both were already popular as solo artists in the early 30s, it was in 1937 after being paired in Gamu-Gamong Naging Lawin that they became more popular as a love team. Their popularity continued with the box-office success of their next movies: Ang Kumpisalan At Ang Batas (1937), Biyaya Ni Bathala (1938), Walang Sugat (1939), Huling Habilin (1940), Magpakailan Man (1940), and Ilang-ilang (1941). Their partnership was temporarily put on hold during the Japanese Occupation. But after the war, their fans still loved them in movies like Tandang Sora (1947), Bakya Mo, Neneng (1947), Kundiman ng Luha (1950), Panata ng Puso (1950), and Neneng Ko (1952).

ELSA ORIA & ELY RAMOS. Elsa was dubbed "The Singing Sweetheart of the Philippines" while Ely was considered the best-dressed screen idol of his time. They made only three movies together (the musicals Bituing Marikit, 1937; Madaling Araw, 1938; and Isumpa Mo, 1947), but all were box-office hits.

CORAZON NOBLE & ANGEL ESMERALDA. Before the Japanese Occupation, Sampaguita Pictures' "Drama Queen" Corazon and her partner matinee idol Angel were raking in profits for the studio with their movies Estrellita (1940), Kahapon Lamang (1940) and Mariposa (1941). Their onscreen love team ended up in real-life marriage, just before the World War II broke out. Corazon endured a brutal tragedy during the last few days of the Occupation-she was stabbed nine times by a Japanese soldier and her 10-month old baby killed during the attack. After the war, she and Angel raised their family again and became the parents of one of the most revered and much-lamented actors in local cinema, actor Jay Ilagan.

CARMEN ROSALES & ROGELIO DELA ROSA. "Mameng at Roger" is no doubt the most popular and most loved tandem of this era. Although they did not like each other at first in real life, they became very successful as a love team and starred in hit movies of this era: classic movies like Takipsilim (1939), Senorita (1940), Lambingan (1940), Colegiala (1940), Tampuhan (1941), Camelia (1949), Maalaala Mo Kaya? (1954), Ang Tangi Kong Pag-ibig (1955) and Lydia (1956). Their romantic scenes while singing as a duet under a tree became their trademark.

DELIA RAZON & MARIO MONTENEGRO. No other love team in Philippine cinema looked as good together as a dashing prince and a lovely princess in those big costume-adventure-romance studio movies, than the tandem of LVN Pictures' tall, dark and handsome Mario Montenegro and the very beautiful and photogenic Delia Razon. They starred in 15 successful movies before Delia got married in 1958. Some of their successful movies were Bohemyo (1951), Rodrigo de Villa (1952), Tatlong Labuyo (1953), Dose Pares (1954), Lapu-Lapu (1955), Ilaw Sa Karimlan (1956), Topo-Topo (1957), and Balae (1958).

SHARON CUNETA & GABBY CONCEPCION. In terms of popularity among the fans, there is no doubt that Sharon and Gabby's team up is the most popular in the 1980s in Philippine show business. 1981, Sharon was 15 years old and was to be launched as a movie star by Sining Silangan productions, while Gabby had a love team with Snooky in his mother studio, Regal Films. Gabby was borrowed to star with Sharon in Dear Heart. It became a blockbuster. The next year, Viva Films was established and Gabby and Sharon starred again in its movie P.S. I Love You. It also became a box-office hit. This started Sharon's reign as the Box-Office Queen of Philippine Movies, a title she held until 1993. They starred in other blockbusters such as My Only Love (1982), Dapat Ka Bang Mahalin? (1984), The Best of Sharon and Gabby (1984), Sa Hirap At Ginhawa (1984), Pati Ba Pintig ng Puso (1985), Bakit Ikaw Pa Rin (1990), Una Kang Naging Akin (1991) and Tayong Dalawa (1992). They got married in 1984 and separated 1987. Their daughter KC Concepcion is also now in show business.

JOLINA MAGDANGAL & MARVIN AGUSTIN. Jolina and Marvin were part of the teen-oriented TV show Gimik (1996) which had a tremendous following. They were one of the strongest love teams on the show and it was not surprising when they were later given their own launching movie as a love team. They even had a tried-and-tested love team to help them in their launching movie-Maricel Soriano and William Martinez. Kung Ayaw Mo, Huwag Mo (1998) did well in the tills, followed immediately by Labs Kita...Okey Ka Lang. They paired again with their Gimik co-stars in the movie version of the TV show, Gimik: The Reunion (1999). They had another blockbuster with Hey Babe (2000), which even had a TV spin-off, Labs Ko Si Babes that same year. They parted ways as a love team and were reunited in the TV show, I Luv NY in 2006.

CLAUDINE BARRETTO & RICO YAN. Although their reel and real-life romance lasted approximately only seven years, the love team of Claudine and Rico proved itself immensely popular. They starred in the following movies which did well in the box-office: Radio Romance (1996), Madrasta (1996), F.L.A.M.E.S. the Movie (1997), Dahil Mahal Na Mahal Kita (1998), Mula Sa Puso: The Movie (1999) and Got 2 Believe (2002).

JUDY ANN SANTOS & PIOLO PASCUAL. Piolo was the hottest male star at that time, Juday was the young superstar. When Star Cinema got them together in Kahit Isang Saglit (2000), fans loved them and a new love team (after Juday got paired with Wowie and then the late Rico Yan) was born. They were paired again in Sa Puso Ko Iingatan Ka and Bakit Di Totohanin in 2001. The fans' giggles continued in their next movies Till There Was You (2003) and Don't Give Up On Us (2006). However, a rift broke up their love team. Both parties maintain they are "civil" with each other now.

BEA ALONZO & JOHN LLOYD CRUZ. In 2003, at the age of 15, Bea was cast as 20 year-old law student Katrina Argos in the TV drama Kay Tagal Kang Hinintay opposite John Lloyd. This paved the way for their team-up which resulted in four successful teleseryes: It Might Be You (2003), Ikaw Ang Lahat Sa Akin (2005), Maging Sino Ka Man (2006) and Maging Sino Ka Man: Ang Pagbabalik (2007). Their love team also gave the public the hit movies Now That I Have You (2004), Close To You (2006), All About Love (2006), and One More Chance (2007). Fans wanted their onscreen love team to become real, but Bea and John Lloyd maintained there was really nothing between them but friendship and work. John Lloyd has a non-showbiz girlfriend, while Bea was rumored to be dating Jake Cuenca. John Lloyd had a hit movie last year with singer Sarah Geronimo, A Very Special Love.

ANGEL LOCSIN & RICHARD GUTIERREZ. Their team up as Alwina (Angel) and Aguiluz (Richard) in Mulawin (2004) was a hit with the televiewers. So it was not surprising when their launching movie as a love team, Let The Love Begin (2005), also became a hit at the box office. Fans had more of them when Mulawin: The Movie was released later that year. Their fans' clamor for another movie was answered when Angel and Richard again made a killing at the box-office with I Will Always Love You (2006). They starred together again with veteran actors Lorna Tolentino, Gina Alajar and Tirso Cruz III in the movie Mano Po 5: Gua Ai Di (I Love You) (2006). Their last movie together The Promise, did not do well in the box-office because of problems that Angel had with GMA-7.

MARIAN RIVERA & DINGDONG DANTES. It was a gamble for GMA-7 to repackage an already mother role-playing Marian Rivera and team her up with Dingdong Dantes. Never did they imagine that the team-up would be bigger than they ever expected. Marian and Dingdong's love team in MariMar (2007) not only became wildly popular but also set a record in Philippine Television-52.6 percent rating on its final episode, beating the 52.1 percent posted by Darna on 2005. Their team-up was seen again in Dyesebel (2008) and was finally seen on the big screen in One True Love (2008), which was a blockbuster. Despite negative publicity after both Marian and Dingdong broke up with their real life partners (Eric Vijandre, Marian's boyfriend and Karylle, Dingdong's girlfriend), their latest team-up in Ang Babaeng Hinugot Sa Aking Tadyang continues to enjoy high ratings.

KC CONCEPCION & RICHARD GUTIERREZ. The Richard and KC love team was drum-beat long before the showing of their first movie together, For The First Time (2008). That's why when When I Met You was shown last February 11 of this year, the "kilig" factor had already sunk in and the movie was an instant hit among their fans, just like their first team-up.