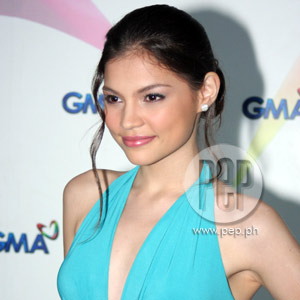 Rhian Ramos was chosen to be one of the leading ladies of Richard Gutierrez in the upcoming GMA-7 primetime series Zorro .

PEP (Philippine Entertainment Portal) received a confirmed report that Richard will be reunited with Rhian Ramos. The story conference of Zorro was held earlier today, February 2, and a PEP source spotted Rhian there along with the other cast members.

This will be the fourth time that Rhian will be paired up with Richard. Rhian's first TV project was Captain Barbell, which was portrayed by Richard. This was followed by Lupin and Codename: Asero, although it was really Heart Evangelista who Richard ended up with.

Rhian's first movie, The Promise, was also with Richard along with Angel Locsin.

Rhian has just finished taping Lalola, which will end this week.

Now that Rhian will be paired again with Richard, this means that the young actress' team-up with JC de Vera has to take a break for a while despite the success of Lalola. JC, incidentally, is being managed by Richard's mother, Annabelle Rama.

Last night, February 2, at the trade show of GMA-7 to advertisers, it was already announced that aside from Rhian, the other leading ladies of Richard in Zorro will be Bianca King and Michelle Madrigal. The latter is another talent of Richard's mom.

Both Bianca and Michelle were part of the telefantasya Dyesebel, which was also their last project in GMA-7.

TJ Trinidad, one of the newest talents of Annabelle and a former Kapamilya talent, will play the main villain in Zorro.

Zorro is slated to start taping this month and will have its pilot episode in March.