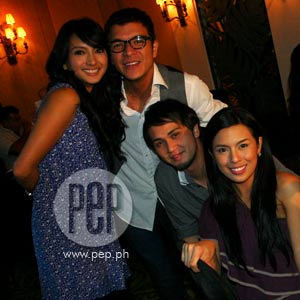 "It was great. I was given the honor of singing the National Anthem and the Alma Mater song. It was quite special, aside from the fact that I finally graduated," says Iya Villania about her graduation last Saturday morning, Feb, 7, where she received her B.A. degree in Psychology. Iya is seen here with Jericho Rosales, Billy Crawford, and Nikki Gil. More photos

Iya Villania was expecting to have a quiet dinner with visiting relatives from abroad last Sunday evening, February 8. Instead, when Iya Villania walked into the Garden Ballroom of the Edsa Shangri-La, she was greeted with a big surprise party hatched by her parents.

Iya had just graduated with a Bachelor of Arts degree, Major in Psychology, from De La Salle University in Manila the day before. And so, of course, her proud parents couldn't let that big event pass without celebrating.

Partygoers were advised to arrive early at the venue, everyone had to be there by 7 p.m. Seen waiting to greet Iya were her manager Arnold Vegafria; Geoff Eigenmann; her friend from her Click days Trisha Roman; and the evening's emcees Eri Neeman and Cheska Litton. Relatives from Australia and classmates from high school and college were seated and waiting for the cue to stand up and surprise Iya.

By 8 p.m., Iya arrived for her big surprise.

Her proud parents, Mommy Elena and Dad Raymundo, stood in front of the hallway of the Garden Ballroom.

On seeing the crowd of wellwishers, Iya looked so overwhelmed with surprise that she turned shy. While trying to contain her emotions, Iya hid by the door, smiling. She regained her composure and then gave her mom and dad a hug. She also gave her manager a hug.

Dinner soon followed as everyone was hungry while waiting for the newly-minted graduate.

Iya was practically all over the ballroom, meeting everyone and showing her appreciation with a hug here and there.

More people arrived at the venue.

Christian Bautista greeted Iya but did not stay long. Gary Valenciano arrived with wife Angeli Pangilinan. They were accompanied by their children, Kiana and Paolo. Sam Milby came by his lonesome.

Couples showed up that night as well. Gab Valenciano was holding hands with Rachelle Ann Go when they arrived. John Prats had Shaina Magdayao in tow. Nikki Gil came with Billy Crawford, who was trying to hide at first when they arrived.

A program soon followed. Jeffrey Hidalgo sang "She" for Iya, who was blushing all the while. Sister Arnee Hidalgo also sang. Both singers are under ALV Consultus, the management arm of Arnold Vegafria.

Well-wishers and messages of admiration also came from Iya's showbiz family, like her fellow ASAP mainstays and ALV members.

Iya's manager told the audience about how hard it was to manage Iya's schedule so that it wouldn't conflict with her studies.

Fellow Lasallian Gary V said, "I hope your graduation would be a model for others to finish their education."

To cap the night, rock band Kamikazee shook the Garden Ballroom and gave the very formal setting a much needed vibe.

Latecomers to the party included Jericho Rosales, Bea Alonzo, and Iya's boyfriend, Drew Arellano. Drew planed in from Hong Kong that evening. He participated in a marathon with his brother and best friend.

Drew was present at Iya's graduation last Saturday morning and then flew to Hong Kong immediately.

Iya, Drew and their friends and relatives spent the night partying and dancing until the wee hours of the morning.