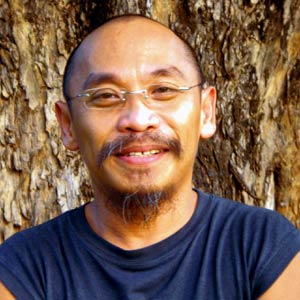 Still no peace in sight for GMA Network and singer-songwriter Gary Granada (in photo). The warring parties issued separate statements over the weekend to further state their stand on the infringement issue raised by Gary against the Kapuso Network over a commissioned jingle for a charity campaign.

The word war between folk singer-songwriter Gary Granada and the GMA Kapuso Foundation continues to escalate with both parties issuing new arguments to stress their respective points.

Tension brewed last week after Gary accused the Kapuso Foundation of violating intellectual property rights. In an audio statement propagated in cyberspace, Gary narrated being asked to arrange a campaign jingle for the GMA Kapuso Foundation in partnership with multinational giant Procter & Gamble.

Gary's study, as he said in his statement, was rejected, prompting the client to seek another composer-arranger. Gary, however, complained that the final version as broadcast resembles the initial version he submitted.

MISDIRECTED ATTACK. GMA Network, in an initial statement, slammed the veteran songsmith's claim of "sole authorship" of the material in question.

The statement further said: "The changes to the GMA lyrics, whether all or some of them originated from Mr. Granada, are mere ideas, or refinements to it. In the case cited, it was held ideas, refinements, and suggestions, standing alone, are not independently copyrightable."

A week after explaining its side, a new statement was issued by the network's legal team to answer Gary's position.

"Mr. Granada is fully aware that GMA (i.e., GMA Marketing) had commissioned a second composer to write the music for the GMA Kapuso Foundation jingle after his own composition was rejected.

"Mr. Granada's complaint of infringement is therefore misdirected. We believe that Mr. Granada is deliberately training his attacks on GMA because GMA is a convenient target for his purposes. We see evident malice here.

"When the second composer submitted to us her composition, we heard a work different from Mr. Granada's. Mr. Granada himself, in an earlier communication, never mentioned any similarity between the two compositions.

"We refer to his email to his manager (a copy of which had been earlier forwarded to us by the manager prior to this controversy). In that email, Mr. Granada said of the composition selected by GMA as follows: 'I have worked long enough in this industry to appreciate with no hesitation the works of other people over mine. I have not at all developed the habit of 'lifting my own bench' as it were. But this is the pits. Any decent producer should know that in this one, mediocrity ruled.' He also wrote: "They chose this composition???!!!'

"Mr. Granada further stated: "Of course I feel offended. But it's their money, it's their call, it's their taste. Reminds me of people who run this country. I feel bad for composers too. This is not a good sign. If the networks and the music and ad industry prefer mediocrity, it is a discouraging signal to people who still hope to pursue excellence."

NOT CLAIMING CO-AUTHORSHIP. Gary then issued a written statement stressing that he is not claiming co-authorship of the final product approved for airing. Pertaining to the statements released by his former client, Gary accused the Kapuso Network of deceiving the public by straying away from the real issue at hand.

The songwriter behind the hits "'Pag Nanalo ang Ginebra" and "Mabuti Pa Sila," among others, stressed that he was accusing the network of unethical practice and that he was not going after sole or co-authorship rights of the jingle.

"Apparently, GMA Network never even bothered to listen to the narrative in its entirety. That is GMA Network's slogan: Katotohanan. So you expect better research from their people. By making it appear that I am claiming co-authorship, GMA Network skirts the issues I have raised, and in effect deceives the public.

"I am a lyricist in my own right, and I have absolutely no interest in 'co-authoring' with advertisement copywriters. I set their lyrics to music by composing pieces which also entails editing their "copies" as is the practice in the industry. If they are indeed capable of 'co-authoring' compositions, there would have been no need for composers to do that for them.

"And lastly, saying that 'GMA Kapuso Foundation had nothing to do with the composition of the music' is splitting the hairs of Pontius Pilate. Of course, they could not have, they are not composers! It is patently lawyer doublespeak. Atty. Dick Perez is not a GMA production assistant, he is a GMA Network Vice President. His letter was printed on an official stationery complete with the GMA Network letterhead with the famous heart-shaped logo. His words therefore express the official position of the entire network. Surely they're not saying GMA Kapuso Foundation in not part of GMA Network. Do you see a disclaimer in Imbestigador that says it is a project of News and Public Affairs together with the Post Production and Marketing Departments and that the Legal Department has nothing to do with it?"