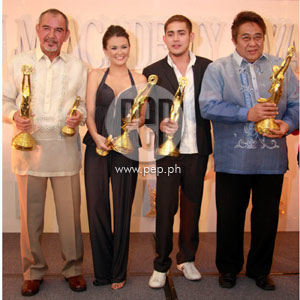 After a long delay, the Film Academy of the Philippines (FAP) finally had the chance to give away the coveted Luna Awards to its chosen winners for the year 2007. The sit-down dinner for the guests and the awards night was held last Sunday, February 8, at the Mandarin Oriental Suites, Gateway Mall, Cubao.

The winners of the 26th Luna Awards were announced last month, with Star Cinema's A Love Story hailed as the Best Picture and its director Maryo J. de los Reyes, Best Director for the year. The top acting honors were given to Paolo Contis for Banal and to Maricel Soriano for Bahay Kubo. (Click HERE to view the list of complete winners).

Among those who attended the awards night were Paolo Contis, Angelica Panganiban (Best Supporting Actress for A Love Story), Boots Anson-Roa, who was honored with the FPJ Lifetime Achievement Award, and Dante Rivero (Best Supporting Actor for A Love Story). Serving as the hosts of the event were Gina Alajar and Robert Arevalo as well as Lorna Tolentino and Tirso Cruz III.

BEST ACTOR. The Luna Awards is Paolo's second time to receive a Best Actor trophy for his role in Banal. He had previously won as Movie Actor of the Year for the film during the 24th PMPC's Star Awards. In Banal, Paolo plays a cop who undergoes SWAT training in the hands of a corrupt superior (Christopher de Leon).

When PEP (Philippine Entertainment Portal) asked the TV host-actor about his most difficult scene in Banal, he quickly replied that it would have to be the torture scene that he went through. He narrated that he was tied to a cross for four hours as he was being forced by Major Sagala (Christopher's character) to become a corrupt cop like him.

Banal director Cesar Apolinario, who was seated near Paolo during the interview, revealed that he had asked his lead star if he wanted to have a stunt double to do this difficult scene, but Paolo decided to do it on his own.

According to Direk Cesar, who happens to be a reporter for GMA News and Public Affairs, there are elements of the film that are based on actual things that SWAT officers do on the field. For instance, some police officers opt to use mineral bottles as a substitute for a gun silencer since it is less expensive than authentic silencers.

Paolo and the other cast members of Banal underwent training with the SWAT team of Makati City for around two weeks so they could faithfully portray the movements of police officers. He recalls that he was very nervous about taping the scenes, especially when it involved shooting with a barett gun that costs around P700,000.

"Dedicated po ito sa hopefully ay ang huling babae sa buhay ko," Paolo declared in front of the crowd. He informed PEP that his fiancée Lian Paz was supposed to attend the awarding ceremony but she suddenly had to go to a taping for TV5 that night.

When the young actress went up the stage to receive the Luna Award, she could not help but become a bit emotional as she gave her acceptance speech.

She recalls that her last acting recognition was way back in 1994 when she won as Best Child Actress for Separada (1994). When Angelica first heard the news that she won a Luna Award, she initially thought that it was just a practical joke.

When asked about her Valentine's Day plans with her boyfriend, she said that they thinking about spending it with a charitable institution for special children. For her next project, she will be directed by Laurice Guillen in an upcoming suspense-drama film that will also star Derek and Gabby Concepcion.

This will mark Angelica's second time to work with Direk Laurice after they collaborated for her coming-of-age film Santa Santita (2004), which earned her a FAMAS Best Actress nomination.

THE DELAY. FAP director general Leo Martinez told PEP that they had difficulty getting sponsors, which explains the delay of the awarding ceremony for the chosen winners.

Still, the FAP managed to conduct an organized awards night that was highlighted by the giving away of the Luna Awards as well as the miniature gold trophies called Lunettes for the nominees.

Members of the FAP and the stars who attended were treated to dinner consisting of Caesar salad, prawn bisque soup, as well as pan-fried fish fillet served with green pea rice and tomato cream sauce.