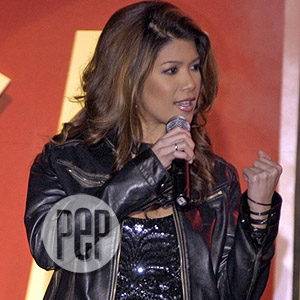 A website has posted rumors that Geneva Cruz broke up with husband KC Montero and that she committed suicide. Proving that she's still alive, Geneva guests live to renounce the nasty rumors about her.

Geneva Cruz appeared on The Buzz to clarify rumors about the supposed breakup between her and husband KC Montero. The rumors started when a website published an October 2008 article saying that Geneva allegedly attempted suicide with an overdose of Paracetamol and that she was rushed to the hospital by her sister. The same website published an article in January 2009, saying that Geneva and KC were no longer together.

According to the website, Geneva had issues with her in-laws regarding the care of her son Heaven [sired by musician Paco Arrespacochaga] who was with them. Relatives of KC Montero also supposedly said that Heaven was no longer their primary concern since Geneva, as a mother, should shoulder the responsibility.

Interviewing Geneva is Ruffa Gutierrez, who commented that it was Geneva's first time to speak up about the nasty rumors surrounding her. Without wasting any time, they proceeded to talk about the number one thing that has hounded Geneva in the first place.

Showing the wedding band on her left ring finger, Geneva answered, "Uhm, obviously we're still together. Yes, we are together."

Have she and KC gone through troubled times?

So does it mean that she and KC are still in love with one another?

When asked when the last time was that love faded, she explained, "It's like, there was a point in my life last year, when I thought I could leave my singing. But music is in my blood and I'm very passionate about my job, e. So I thought I could be a housewife. Mas sanay ako mag-multi-task na asawa, mother and artist ako."

So what's their setup now, she and KC?

With these words, Geneva suddenly became teary-eyed and said, "No, I'm not gonna cry. He was the one who said, 'Mom, I read it! Well, I'm gonna do something about it!'"

Geneva added this message to her son. She said, "Baby boy, thank you for being my knight in shining armor. You will always be my past, present, and future."

THAT NASTY SUICIDE RUMOR. Geneva, who was still crying, related that her mom was panicking when she heard about the suicide issue. It prompted her to contact Geneva, who was actually about to do a show in New York.

"Yung sinabi nila na I committed suicide, that is so finished," Geneva said, "because marami na akong pinagdaanan para gawin yun? First of all, I am against that. I have seen a lot of people who are close to my heart na nagpakamatay sila. I think katangahan talaga yun. Harapin niyo ang problema."