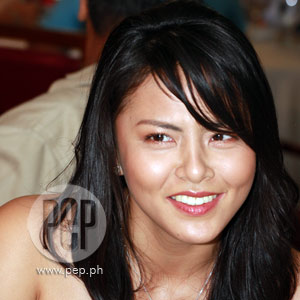 "I think napagod na ako in working things out on my own. I just really decided, after ng breakup namin ni Jimmy, to really commit myself to God and do things right," says LJ Moreno about how her past romantic relationship rebuilt her spiritual relationship with God.

This was the statement of comebacking actress LJ Moreno in an interview at the press conference of Pinoy Fear Factor: Argentina, South America yesterday, February 16, at 9501 restaurant in the ABS-CBN compound, Quezon City.

The 27-year-old actress said it is time to pursue her long-planned showbiz comeback after her breakup with basketball cager Jimmy Alapag.

"It was more on, 'It's okay to be a teacher. It's okay to earn this much because eventually we're gonna move back to the States after he plays basketball and I'll just pursue my career in teaching there.' 'Yong showbiz, parang nawala."

LJ went on to say that somehow she had enough time in practising what she learned in school during her break from showbiz.

The "daredevil chick" of Pinoy Fear Factor added that with her showbiz comeback, she would just consider teaching as a fallback whenever she decides to stop working as an actress.

LJ said, "Eventually, I'll put up my own day-care or school later on, siguro when I have my own family. At least, that's something na I can do and be a mom at the same time. Pero for now, balik-showbiz ako."

Even before she joined Pinoy Fear Factor, LJ already started to be visible again in show business by playing a role in the movie Status: Single, which was topbilled by her friend Rufa Mae Quinto. Right now, LJ, whose showbiz career is being handled by Veronique del Rosario-Corpus of Viva Artist Agency, attends to some go-see and auditions while waiting for her next project.

CLOSER TO GOD. Aside from going back to the career she first loved, LJ's breakup with the Jimmy also drew her closer to God.

She related, "Ever since I was a kid, I always have time, I always pray to God, before nagba-Baclaran pa ako. Naging kami ni Jimmy and I started compromising. After the breakup, sabi ko, 'I'm not compromising my relationship anymore. Kasi, para sa akin, what helps me do things that I did... Let's say I do give it up to my next boyfriend, God can always take him away. Bakit ko pa gagawin 'yon? I might as well do it right this time."

This decision did not only renew her relationship with God, it also made her feel much better about herself.

"Kasi, di ba, the guy won't have anything to say about you," she explained. "Women are emotional beings kahit na sabihin mong never tayong hindi puwedeng ma-attach. Di ba, imposible 'yon, e. Parang I feel like I'm helping myself out. So many blessings have come since I made a decision to acknowledge God."

LJ thinks that the split has given her something positive, unlike the other breakups in local showbiz.

"I think the breakup both did us good kasi we're so dependent to each other. At least ngayon, nakapag-grow ako on my own. I'm happy na we're friends."

During the press conference, the media learned that after being eliminated, LJ stayed in Argentina's capital city, Buenos Aires.

She explained, "Kasi, I didn't have anything to do anything anyway pagbalik dito. Kasi, parang may set date na for shooting. So naisip ko, since nandoon na rin naman ako, I traveled 36 hours to get there, might as well get to see Buenos Aires."

Although Pinoy Fear Factor is about to end on Friday, February 20, LJ said that she and Maxi maintain constant communication.