Martin Nievera opens up on failed marriage with Pops Fernandez 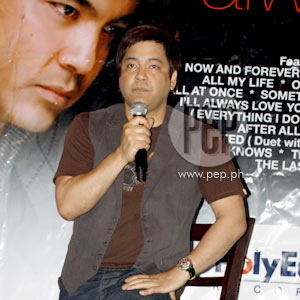 "I tried a lot of times," confided Martin Nievera on his past attempts to win back ex-wife Pops Fernandez. "I knew it was over when she became over with me."

Concert King Martin Nievera confessed that he went through a difficult period following his separation with ex-wife Pops Fernandez.

At the press conference celebrating the release of his latest record, For Always, held at Italliani's restaurant in Greenhills, San Juan yesterday, February 17, Martin narrated how he felt in losing his family and struggling to regain control.

"'Cause people don't know. They think I didn't take care of her [Pops] because we're not together now. How do you know that I didn't have suicidal nights just trying to get myself to realize, 'Look what you're losing? You're so stupid, you're gonna lose everything. Forget your career, you can always get that back, but your family.' How many times do you think I've been on my hands and knees, literally, with Pops and she said 'No'?"

"MAYBE I DESERVED IT." Martin, despite rumors of infidelity, stressed that he did his best to save the marriage.

"After a couple of, maybe three months after leaving the house and living this way, I was having a debate with Pops and after all of those things, 'Here are my car keys, here's my cell phone, do whatever you want. Give me another chance and tell me, help me save this family. If you don't trust me, here's my car key, here's my cell phone, I will not leave the country without you. I won't leave the house if you don't want me to leave. Here, it's there!' Instead she said, 'No, no, no, I don't want it.'"

Martin revealed that they even tapped a pastor to serve as mediator. During the course of a heated argument, Martin was asked point blank on his alleged philandering ways.

"And then there's one question, 'Are you still in contact with the girl?' And then [I answered], 'Of course! What do you care who I call during my downtime away from the house? You wanna know what I'm doing when you're not around?'

"I should have lied. I should have said, 'No, I don't call anybody. The phone is disconnected' or I should have made up any lie I wanted, but I didn't. I told the truth. I think I called a lot of people. This is the worst time of my life. Parang ano, she wanted her cake and she wanted to eat it, too."

Talking about the past, Martin said that he was honest enough to admit his mistakes to Pops during the time. And by owning up to his flaws as a husband and father, he was likewise hoping to come out clean and rebuild the family. The singer even likened the experience to a telenovela.

"Again, this is the past. It's not today," he reiterated. "I tried a lot of times. I tried even without trying by just being there for Pops. It's like you've seen a movie when you're just really good friends but you're in love with each other. Ganun, it was a real-life show Filipino script."

STARTING FROM SCRATCH. "How many more boyfriends do you need to have for me to know?" Martin snapped back when asked what prompted him to give up the fight to win back Pops.

He was of course pertaining to the time when Pops was being linked to much younger men at the height of the split.

"Because they're younger, they're better good-looking? For me, I'll never be that age. So as years gone by, I've become more and more insecure with my appearance. That I was happy with 'okay lang', I was happy with whatever I had. I made a life with whatever I had at that point of my life. As opposed to, you think I would go out there and get all the Vicki Belo's to death and come back as a 21-year-old boy? Forget it, there's no way I could compete with these young good-looking guys, no way."

"Then my career started again, albums, people signed me up, believed in my music again. I just concentrated on my music and I tried to make it in other parts of the world just to be able to tell myself I'm still worth it.

"Men who were assholes and you can use whatever word you want, you go through a cycle and you have this new awareness of the crimes that you've committed and what are the consequences. You started living the consequences of your mistakes and it takes a man who knows how to bounce back and that's what I did after many attempts."

CONCERT HANGOVER. Martin and Pops recently had a pre-Valentine concert last February 6 at the Araneta Coliseum billed as Missing You. The concert, produced by Pops's current flame Jomari Yllana, was also a public declaration that all's well between the former couple. It wasn't a smooth process as both parties went through a number of heated verbal tirades before finally agreeing to repair their relationship as friends.

"You know the whole thing, no pain no gain? It also applies here. And that's what you saw in Araneta. We do what we want. Pops and I started with so much love and strength that that became the foundation of everything," explained Martin.

The concert was not deprived of any drama. Martin, in particular, shed tears during one of the numbers when photos of his family were flashed on the screen. He said it reminded him of those good old times.

"Because I remember those days and we're all four," Martin contemplated. "Exactly everyone else is crying during the show. I completely lost it, as in nakakahiya."

So, did he enjoy performing with Pops again after years of not working together?