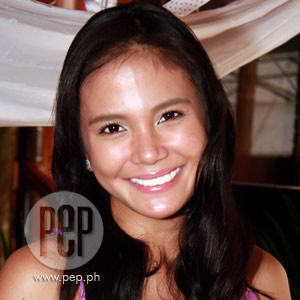 "I'm really happy right now, happy that I am single. Alam mo 'yon, I can do anything na hindi ko magawa before," says Isabel Oli about her current status after her breakup with long-time boyfriend Paolo Contis.

Isabel Oli was all smiles when she faced the media at the press conference of her newest endorsement, My PLDT DSL, earlier this afternoon, February 19, at Annabel's restaurant on Tomas Morato Avenue, Quezon City.

Isabel knew that the entertainment press would bombard her with questions about her breakup with former boyfriend Paolo Contis late last year. So, when she was asked how is she doing, she gave a short laugh and answered, "Okay naman. Ang saya, sobrang saya!"

The 27-year-old actress continued by talking about being single, which she missed during her three-year relationship with Paolo.

Does this mean she has already moved on?

Despite this positive outlook, Isabel admitted that there are moments when she feels lonely. But she immediately added, "Pero alam mo 'yon, I know that I am not alone. Sobrang mixed emotion palagi, e. Pero I'm really happy right now. Happy that I am single. Alam mo 'yon, I can do anything na hindi ko magawa before.

MEETING PAOLO AND LIAN. Isabel looked surprised when she told the media that she still has not seen Paolo after their breakup, in spite of working on the same network.

What about his new girlfriend, EB Babe Lian Paz?

Since Isabel is an endorser of My PLDT DSL, Mr. Gary Dujali of PLDT told the media that there's a possibility for Isabel and Lian to meet each other in one of their events because the EB Babes are often invited to their car-drifting event.

Is this going to be okay with Isabel?

CLOSE RELATIONSHIP WITH PAOLO'S FAMILY. During the interview, Isabel also explained the relationship she had built with her ex-boyfriend's family.

What about the issue saying that Paolo's mother likes her more than Lian?

ENGAGED FOR THREE WEEKS. Isabel also revealed that the controversial ring that Paolo had given her on her birthday was actually their engagement ring. However, she returned this to Paolo when she thought that their relationship was not working out.

Does she think that the ring Paolo gave Lian was the same ring she received on her birthday last year? (Click here to read related article.)

NOT YET OPEN TO NEW RELATIONSHIP. While Paolo has already found a new love, Isabel said that she's not yet looking for a new guy. She even cleared the issue about her dating a basketball player, who was later named as Wesley Gonzales.

"Ayaw ko muna talaga. The word is not trauma. Parang napagod ako, e, and I'm scared at the same time. So, I'll just treasure this moment of being single na muna, alam mo 'yon, time for myself."