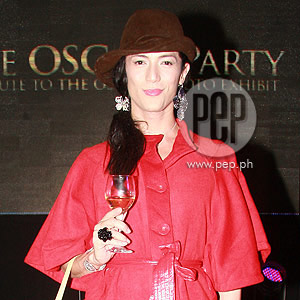 When asked about her wardrobe critics, BB Gandanghari just smiled and said, "Really? That's sad. As far as I know, this is [outfit] is from New York."

BB Gandanghari's arrival at the "Tribute to the Oscars" event of Velvet, held at the Ayala Museum in Makati, created quite a stir.

She did not have any participation in the photo exhibit, everyone wanted to have a photo taken with him

The "newly-transformed" celebrity, who claimed that her identity as Rustom Padilla is dead, was ecstatic about the reactions she's been getting from the people.

In an interview with PEP (Philippine Entertainment Portal), BB exclaimed: "What can I say, I'm very happy!"

Looking back, the 43-year-old star said that coming out of the closet was a long process for her. Her decision to finally tell everyone about her sexual preference came after his short stay in New York.

"It's really a process," BB told PEP. "Of course, eventually, I faced the reality in New York. When people, parang mga kaibigan na nakilala ko doon, parang all of a sudden, everyone is calling me BB."

STAYING AWAY FROM NEGATIVE COMMENTS. While many appreciated the new BB Gandanghari, some were not too happy, even ridiculing the way she dresses, talks and walks.

BB arrived at the party clad in a red top over a long black skirt. She chose to ignore the negative comments.

When we related to her the comment of stand-up comedian Vice Ganda about her "baduy and mismatched"outfits, BB just smiled and said, "Really? That's sad. As far as I know, this is from New York." Then she added in jest, "Huwag ninyong tutularan, bad example. You don't do that."

As for her lovelife, BB said it's not her priority. She added, "I'm very busy with work. Yeah, I meet a lot of people but nothing serious, just meet and greet."

CLEARING SOME ISSUES. PEP also took the chance to hear BB's side on the alleged commotion she caused at the Embassy Club in The Fort Taguig, where she was spotted wearing "super-super short shorts."

BB just shook her head and stated, "I don't go out."

How about an old issue about an actor named Alvin Fortuna who claims that he was played around by BB when she was still Rustom Padilla? Alvin said in an interview that he was allegedly asked to do some sex scenes in the movie by Rustom, who was supposedly producing and directing it. But in the end, Rustom told the newcomer that it was just a test shoot and the film was shelved. (Click here to read related story.)

BB was surprised when PEP asked her if she knows the guy. She just said, "With BB? I think you're talking to the wrong person."

Another unsettled issue in her life involves her family. During the interview, we told her that her mother Eva Cariño and brother Robin Padilla had already spoken to the media and press, saying that BB has their full support. Upon hearing this, a smile lit up BB's face as she said, "I never believed otherwise."

She continued, "I'm happy. I mean, you know, at this point, I don't want complications, alam mo 'yon... Kaya kung anuman 'yong mga naririnig-rinig ko, I don't want that. I just wish for peace, especially with my family. I miss them, actually."

Since BB mentioned missing her family, does she have plans of visiting them soon?

She answered, "Of course, we're just waiting for that moment. Naghahanap lang ng free time to get together."