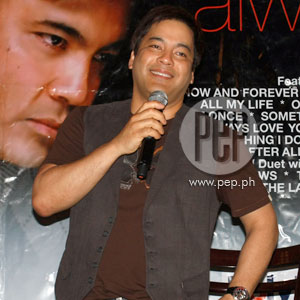 "For many reasons, I think. And it had nothing to do with us being related. You know, we're distant cousins. A lot of people would say that's wrong, but love is love. Love is blind. I think Jackie and I were better off as friends. Starting off more than friends, but better yet to end up as friends. I still text her from time to time. I greeted her on her birthday. She's still very, very dear to me," Martin Nievera said of Jackielou Blanco when asked about her in The Buzz's

"Because G comes before M, alphabetically," sagot ni Martin na ikinatawa ng audience. "And I know that Gary is also not into that whole billing thing, so it doesn't really matter to me, if he's top billing or I'm top billing."

"Well because para sa mga nanonood naman ng concerts, I don't think they really care anymore. Even in the movies, you don't see the names in a boy or with flowers. And the word AND, hindi na uso yan. It's understood na kami ni Gary ay friends and pantay sa business."

"Well, insecure of Gary V? Absolutely, yes! I started a few months before he did, although he's on TV a year before I started. To see this guy, capture almost the same audience and he's electric on stage. I mean his poetry, his motion, so I'm thinking to myself, I can't do that. So, siyempre, na-insecure ako. And beefed up what I do well, all those love songs."

"I never disliked him, never!" bulalas ni Martin. "We were the best of friends. No, totoo! We hang out together. I go to his house. We talk about girls and life and everything."

Totoo bang you pushed him to court Pops [Fernandez]?

"Yes, I did. I was watching The Buzz last week. It's true! I was like the middleman. They are both my best friends. 'Go ahead, man, I'm not courting her. It's okay.' But I had two kids."

"Oww, you found out!" nagulat na reaksyon ni Martin. "For many reasons, I think. And it had nothing to do with us being related. You know, we're distant cousins. A lot of people would say that's wrong, but love is love. Love is blind. I think Jackie and I were better off as friends. Starting off more than friends, but better yet to end up as friends. I still text her from time to time. I greeted her on her birthday. She's still very, very dear to me."

"Their mother, I'm sure. Not because they love me less. But they told me the answer to that question. Because when they were younger, in the courts they were made to choose. And I didn't want them to choose. That's why I didn't contest. I didn't make it hard for Pops to annul me because I didn't want my kids to choose. But now that they are older, I asked them the same question. And they said to me, they won't leave their mom unless their mom is parang old enough to leave their house. Because they feel that they are responsible now for where I left off as the guardian, the bodyguard of Pops. So, whatever relationship Pops had in the past, they have to go to Ram and Robin first, not their dad."

"Sa The Buzz, because you're heaven on earth," tugon ni Martin na ikinatawa ni Boy. "Where would I end up, if ever I took my life? I think I'll end up in hell, because that's what was said in the Book. But I don't think it was really a wrong decision. There was a time that everyone thinks I'm so bad. But I'm so glad, that I'm still here."

But if you're going to heaven, sino ang isasama mo?

"Absolutely nobody. I go there by myself."

"Oo, because I want to see Jom's face in all the wedding pictures. I've always said this, if ever Pops were to marry anyone, it doesn't have to be Jom. Whoever she ends up with, I always wanted to be the one who will give her away. People may find it a little weird. But in my case, the love that I develop with Pops..."

"Well, you know that her father is no longer with us. So, I think I have now graduated as a lover, as a husband, to a fatherly kind of love."

But you're an ex?

"It doesn't matter. And doesn't matter to anyone that we're ex. We seem to be doing pretty good. But I have to be there. I really do because she is still my responsibility. I think it is something I should do. Maybe one of those roles. Maybe maid of honor," biro pa ni Martin.

So, what do you have na wala siya?

"What do I have? I have more years with Pops. I know he knows her very well, after working with him. But I think I know her a lot better."

"I don't think I ever said that. I think I was misquoted. They asked me if I would join, kung sasama ako ulit sa show ni Lani with the Society of Seven. At yung balita sa Las Vegas , wala na si Lani sa SOS, sa Society of Seven. But she's very much active in show business. And she's very much with a beautifully blessed career. So, if she got the information na ako ang nagkakalat ng tsismis na walang career si Lani, paano ako, wala din akong career, di ba? So, what's my karapatan there, di ba? So, it's not true. I didn't say that. If it hurt Lani in any way, I apologize. She's very blessed in Las Vegas . We're blessed with her."

"This must have been the time that I was really weird. And I thought that any guy that looked at Pops is going out with her. I didn't want that. You know, I was so jealous. Aga is a very good friend of mine, especially when Pops and I broke up. And I felt bad when I knew, you know they were friends but I didn't know how that friendship alone drove me crazy.

"But there was no confrontation. There was no suntukan or sigawan. I just asked him, 'Dude what was happening? I thought you were like trying to fix us as opposed to being linked to Pops.' But for me to say anything further would be confirming it that they had anything, which I really don't want to confirm on TV. All I can say is, wala kaming confrontation. I was just really jealous of any guy, during that breakup, during the time that I wanted to get her back. I was jealous of her shadow, for heaven's sake."

"Forgiveness?" bumuntong-hininga muna si Martin bago sumagot. "Really, the truth, the mother of Santino, Katrina. Because you know, I got to the worst. You know the gossip in the business, I've been trying so hard to keep the people who I care about, and who care about me, away from the limelight. It's impossible, I know. But you know, she went through the worst."

What do you want to say to her?

"Like I've always said, my world is not the best place to be. Of course, how we started, before Santino and all of that. It's very hard to someone na hindi kasama sa showbiz, na hindi ganun yung klase ng puso nila, yung face. I mean they don't have the structure of indestructible kuno, structure of an artista. So, I apologize to her. She would be the one I would want to ask forgiveness with regards to so much torture, so to speak. Because she doesn't deserve that. She deserves much better."

Do you think she will forgive you?

"She always does. She's the most forgiving person I know in this world. In my world, I know, it really takes a very strong person. And I really admire Katrina for that."