One Kapamilya and two Kapuso artists among the 24 candidates of Bb. Pilipinas 2009 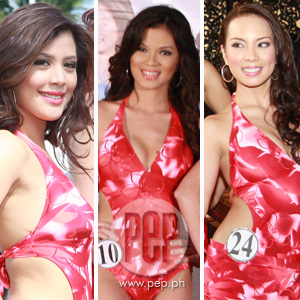 One Kapamilya and two Kapuso artists are among the 24 lovely candidates for the Binibining Pilipinas 2009 pageant. They will compete to earn the right as the country's representative in the Miss Universe, Miss World and Miss International pageants.

Rich's fellow Kapuso Abegail Lesley Cruz or Abby Cruz enters the pageant for the second time for a shot once again to win any of the three Binibini crowns at stake. She was second runner-up in the Bb. Pilipinas 2007 pageant. She is now candidate No. 24. Abby is also the current girlfriend of Paolo Bediones, who, incidentally, is hosting this year's pageant.

The press presentation of the Bb. Pilipinas 2009 candidates took place at the Sunset Pavilion of the Sofitel Philippine Plaza in Manila, yesterday, February 24. Paolo Bediones hosted the affair which was attended by representatives from print, broadcast and web media.

Before the coronation night, which will be held at the Araneta Coliseum on Saturday, March 7, 9:30 pm, the candidates will make TV guestings and will showcase their runway skills in a special fashion show at the Gateway Mall Activity Center on Saturday, February 28, 6 pm.

The next day, Sunday, March 1, Araneta Center shoppers and visitors will catch a glimpse of the candidates in a colorful Parade of Beauties scheduled to kick-off at 4 pm.

Meanwhile, ongoing until February 27, is the photo exhibit that chronicles the glorious years of Bb. Pilipinas at the Gateway Mall Activity Center.

The coronation night will be broadcast live by GMA-7. Paolo Bediones and Iza Calzado will be the hosts.

Click here for the video of the press presentation.