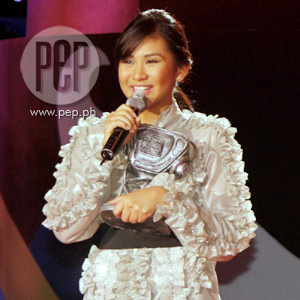 Sarah's fans, the Popsters, were in full force as they screamed for their idol every time her name was called and as she went onstage to receive her awards.

The MYX Music Awards is a yearly event started by the MYX Music Channel in 2006 to honor the biggest hitmakers in the local music business. MYX viewers from all over the Philippines decide on the winners of the awards and send in their votes through texting. Last night, the presentation of the awards took place at the Meralco Theater in Pasig City. Top personalities from the music, television, and movie industries attended the event.

Young belter Charice Pempengco and Journey's new frontman Arnel Pineda were given the MYX Special Citation awards for giving honor to the Philippines by their world-class performances. Both Charice and Arnel were discovered in the video sharing website YouTube, and have since made their presence felt in the international music scene. Arnel went onstage to receive the award, while Charice was represented by Star Records managing director Annabelle Regalado.

Legendary Pinoy Rock band The Eraserheads was also honored with the MYX Magna Award for their exceptional contribution to the Philippine music industry. The band's drummer Raimund Marasigan received the award in behalf of his bandmates Ely Buendia, Marcus Adoro and Buddy Zabala who were not present at the affair. Raimund (or Raims) also hosts MYX Channel's Myx Tugtugan. He is also a member of the bands Sandwich, Pedicab, Project 1 and Gaijin.

Favorite Guest Appearance in A Music Video: Karylle ("Only Hope" by Gary Valenciano)

Just tune in to MYX on Skycable Channel 23 and log on to MYX.TV for updates on the MYX Music Awards 2009.