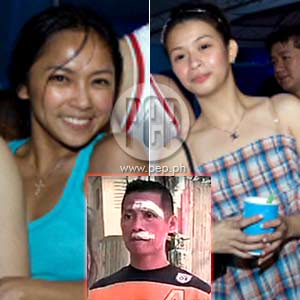 "I would never dare to raise hands on anyone there. My only intent was to correct them," Joshua Formentera (inset) defended himself on the Boracay incident that involved him and Sexbomb dancers Rochelle Pangilinan (left) and Aifha Medina (right), and non-showbiz friend named Michelle Villanueva (not in photo). (Click here

Following the story about the Boracay incident involving two Sexbomb girls, PEP (Philippine Entertainment Portal) was able to get the side of Joshua Calixto Formentera, who allegedly started the scuffle. He put emphasis on two things: (1) He "never dared to raise hands on anyone there" and (2) He felt violated.

It was earlier reported that Sexbomb dancers Rochelle Pangilinan and Aifha Medina, and their non-showbiz girl friend—identified as Michelle Villanueva—had a heated argument with Joshua Calixto Formentera over the "loud music." (Click here to read related article.) During the incident, Formentera sustained physical injuries, and the other parties involved were called to the police precinct for an investigation.

Airing his side via media was not part of Joshua Formentera's initial plans. "I am a very private person," he told Karen Pagsolingan, the managing editor of PEP, in a phone conversation at around 1:00 a.m., today, April 13. But after hearing about the girls' version of the story, Formentera—who happens to be a human rights advocate and owns a pre-school—felt the need to refute some claims of the Sexbomb girls' camp.

His full account is as follows: "On Maundy Thursday I was sitting quietly, sunbathing with close friends and family, including foreign diplomats, at the beach in front of our hotel Crystal Sands Beach Resort. At 2:00 p.m., a group of about 7 to 8 young outside people placed themselves next to us and began to play loud music, dance, and take photos of themselves.

"I felt they presented a very embarrassing and negative picture of Filipino youth to my foreign guests and my spouse, so I asked them to quiet down. They refused and shouted 'Who are you? The owner of the resort?' I answered, 'No,' but I was a customer for many years. I then went inside the hotel to ask the reception to take care of the situation as I was seeking no further discussion.

"When I went back to sit down with my friends, the 4-5 girls in this group again started dancing, harassing us, shouting abuses and acting very agitated, all pale in the faces. We tried to ignore them until one of them shouted "bakla" in a very loud voice. I went over to them and told them I am gay and proud and I don't accept being insulted.

"I asked the girl why she acted so rude. All of a sudden and without any warning she threw a heavy glass right in my face from a distance of about a meter. I felt a hard impact and realized there was plenty of blood pouring down my face and body. I became dizzy but was able to tell my friends to stay calm and to call the police.

"I heard a girl call out that she was from Tondo and knew high-ranking police officers, so she was not afraid anything would happen to them. I managed to get to the bathroom of the hotel to wash some of the blood off. My friends went several times to the reception to ask the police to come instantly. I asked them to watch the group until the police arrived to prevent anyone from escaping.

"When the police came, I requested that the group be taken to the station for interrogation until I had obtained my medical report. Then I went to the clinic for treatment. It turned out I had suffered two deep lacerations in the face, one of 5-6 cm and the other 2-3 cm. They had to be stitched. When I went to the police station to identify the perpetrators, there were only six persons – three girls and three boys, while two of the girls forming the group at the beach were not present. I asked for the two girls, but the police said they could not find them."

In the following paragraphs, Formentera states his defense regarding his alleged physical threats during the incident.

He explained, "I never made any kind of threats and I never tried physically to attack the group at the beach in any way. I am a human rights activist. I have consistently worked for the development and promotion of women and gays rights. My organization helps battered and raped women. I could never in any way consider harming a woman and I hold women in high respect.

"I did have an almost empty plastic bottle of water in my hand at the beach as it was a very hot day, but I never made any suggestion to throw it at anyone. Anyway, with at least three young men around them, the girls had plenty of protection. I even would not start a fight with the men after I was hit by a heavy glass. Instead, I asked my friends to stay calm and call the police."

Formentera mentioned that one of the guy friends of Rochelle and Aifha approached him to extend apologies. However, according to Joshua, none of the girls showed any remorse.

"One of my friends was able to take photos of part of the group right after I was hit. It clearly appears that the girls were shocked by the consequences of their attack. While I was waiting for the police to arrive, one of the boys came over to us to offer an apology. This was repeated at the police station. None of the girls, however, at any time showed any remorse or apologized. On the contrary, their attitude was very arrogant."

At the end, Joshua Formentera reiterated, "I defend my rights. I will never accept being abused or insulted. We need to speak up whenever there is discrimination or violence. We all choose our own lifestyle and others should respect that as long as we do no harm to them. All I ask for is respect. I will at any time defend my right to relax peacefully at the beach with friends and family, sunbathing, without being insulted, abused and attacked."

At press time, Formentera plans to take legal action against the people involved in the incident.