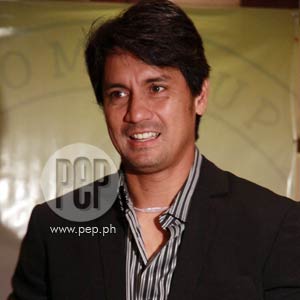 In an interview with the former matinee idol at the press conference of the 14th Goma Cup Reunion yesterday, April 18, at Gloria Maris restaurant in CCP Complex, Pasay City, he told PEP how much he misses hosting Family Feud.

"Katulad nga ng sinabi ko, this is one of the easiest shows I've worked with, one of the happiest sets na nagkaroon ako. People were very cooperative and that's the reason siguro madali ang taping namin, it was moving smoothly."

Richard is also glad that throughout his game show season, which fared relatively well in the ratings game, he was able to prove to the audience that he could be an effective game-show host.

Although he bade goodbye last Friday in the last episode, Richard assured PEP that this is just temporary. "Babalik 'yan by September," he said with a smile.

Family Feud will be replaced by Hole In The Wall beginning tomorrow, April 20.

THE GOMA CUP REUNION. For almost seven and a half years, Richard's brainchild, a golf tournament called Goma Cup, was put to a halt. Now, it's making a comeback with a "reunion" on April 22 to 25 at Fairways and Bluewaters in Boracay.

Richard is very excited about the event because it's going to reunite all the interested celebrities, which is actually the aim of this golf tournament.

Richard works with Marilen Nuñez of Len Plus in organizing the event, where an Omega watch worth P1.1 million, Omega Constellation Double Eagle Co-Axial "Mission Hills" Numbered Edition Rose Gold in black strap, will be given to the overall champion. Also, a titanium Omega watch worth P400,000 will be given to the celebrity golfer who will achieve a "hole in one" during the competition. In case nobody achieves that feat, the watch will be raffled off at the awards night.

VACATION FROM WORK. For this event, Richard had himself excused from taping of his primetime show in GMA-7, All About Eve. "Matagal na akong nagpaalam kaya alam nila na mawawala ako for the Goma Cup," he said.

Following this event is a more personal vacation with his wife Lucy Torres-Gomez and their daughter Juliana. They are set to leave the country for the Manny Pacquiao-Ricky Hatton fight in Las Vegas, Nevada on May 3. After this, Richard said, "Ise-celebrate namin yung 11th [wedding] anniversary namin."