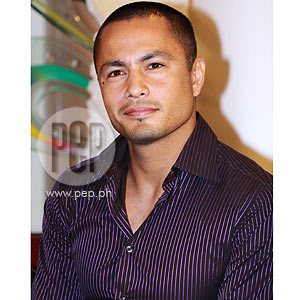 Derek Ramsay on being the "favorite leading man": "I'm very thankful, you know, that I'm blessed [with TV projects]."

Among the Kapamilya actors, Derek Ramsay is one of the most visible in ABS-CBN today.

The 29-year-old actor currently plays the role of Gabriel and Ross in the weekly show Komiks Presents Mars Ravelo's Nasaan Ka Maruja? He is also taping his second teledrama with Judy Ann Santos, titled Habang May Buhay and soon he will be part of the TV series The Wedding.

He was dubbed by the entertainment media as "Favorite Leading Man" during the press conference of Maruja.

Derek says it was flattering to hear the title, but "I don't think nandun na ako, marami pa akong kakainin."

The moreno actor thinks that he still has a lot of things to learn in the industry he has known for four years. "I'm still not that confident to be tagged as that. Right now, I learn from my directors, my co-actors," he said modestly.

Derek used to be camera-shy and never imagined himself as an actor. "I used to do commercials, modeling—takot nga ako sa camera, e. But life, it's funny, ito nga ang nangyari sa akin, ito na."

Derek started his showbiz career as a commercial model. He got his first regular TV gig when he became a veejay on MTV. His luck continued when he was invited as a guest co-host in the defunct showbiz talk show Entetainment Konek (ETK), which he considers his first major exposure in local showbiz.

From hosting, Derek shifted to acting when he was offered the TV adaptation of Carlo J. Caparas's komiks called Ang Panday.

He recalled the moment he first heard about this project, "One day, after isang episode namin ng ETK, they asked me if I wanted to do Panday. They said I'm gonna be living in Bohol for two months. Parang ako, 'Wow! I get to see the Philippines, go!' Sabi ko, 'Sige, ninenerbyos ako. Hindi ako marunong umarte, bahala na, let's do it.' Talagang I just jump into it. So, that's the beginning of my career."

HOPING FOR LONGER SHOWBIZ CAREER. The producers and even the Pinoy audience apparently liked Derek's acting skill, so he was offered more projects. Among the TV shows that he did are Super Inggo (2006), Maging Sino Ka Man: Ang Pagbabalik (2007), two episodes of Your Song Presents, four episodes of Maalaala Mo Kaya, and Ysabella (2007). He was also cast in the movies Matakot Ka Sa Karma (2006), One More Chance (2007), Sakal, Sakali, Saklolo (2007) and T2 (2009)

Derek remembers how much he liked his last TV series Ysabella. Aside from being his biggest break in show business, his role as Chef Mito Valenzuela was "different from any other role that I've played. Ang dami niyang emotions, e—mabait, flip, nagalit, nagpa-humble. So talagang up and down, up and down. I would say that portraying Chef Mito was my biggest and my most memorable character."

Going back to his life as a celebrity, Derek said that one will not always feel the "happy moments." In fact, he admits there were times when he thought of leaving the industry.

"I have to admit there are times, I promise you na, 'Ayaw ko na.' But nakita mo, like today, medyo pabagsak na ang energy ko. But when I saw the trailer, it just goes up. Kasi, hindi mo nakikita habang nagtra-trabaho ka, e. But when you see the actual project, your energy lifts up again."

In the end, Derek's mood changed when PEP asked if he wished to stay longer in the industry: "Hopefully, hopefully [mas matagal pa]. It takes a lot of hardwork."