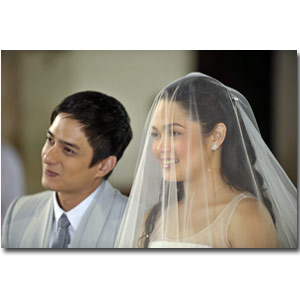 Judy Ann Santos and Ryan Agoncillo wanted their wedding to be a private affair. So private that the couple's selected guests showed up at the ceremony without cell phones and cameras.

Megastar Sharon Cuneta was handpicked by the couple to serve as Matron of Honor while Ryan's elder brother Dondi stood as Best Man. The young couple's adopted daughter, Johanna Lois or Yohan, was the flower girl.

Early reports said that Ryan's parents were married in the same church. It was, however, clarified that Mr. Chito and Nina Agoncillo tied the knot in Rosario Church, Batangas City. Unfortunately, calamities over the years destroyed the church, prompting Ryan and Juday to choose the nearby San Juan Nepomuceno Church instead.

The secrecy of the affair caught even the local residents and some church officials by surprise.

FAIRY-TALE ENDING. The wedding entourage proceeded to a local resort after the nuptials for breakfast.

SNN: Showbiz News Ngayon reported that the newlyweds initially wanted to serve the wedding guests a tapsilog meal for breakfast outside the church. The idea was scrapped since it would surely generate attention, and also to maintain the privacy of Juday and Ryan and all their guests.

An evening reception was also prepared to accommodate other guests. Most of the couple's friends—like Gladys Reyes, Bianca Gonzalez, Gina Pareño, Paolo Bediones, and Dominic Ochoa—came all the way from Manila.

Judy Ann and Ryan met in 2004 when they worked together for ABS-CBN's primetime fantasy series Krystala. The couple at first tried to keep the relationship a secret. Their actions together on various public gatherings, however, revealed the obvious.

Many thought that the wedding was scheduled on May 2, as previously reported. But the actual wedding date was kept secret by the couple, even to their close friends.

Alfie's presence proved that his good relationship with Judy Ann, as well as with Ryan, remains intact, contrary to rumors.