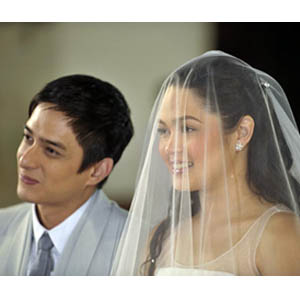 Judy Ann and Ryan's wedding was one of the most successfully planned showbiz events in terms of secrecy and simplicity.

The much-awaited wedding of Judy Ann Santos and Ryan Agoncillo last April 28 in San Juan, Batangas, was a big surprise in the showbiz world for its complete secrecy. Celebrities are hard-put to keep their private lives away from the public eye, of course, yet Judy Ann and Ryan managed to keep the most intimate occasion of their lives to themselves, their family, and a few selected friends.

Pulling it off was no easy task, as Ryan's manager Noel Ferrer explained in a taped interview with Startalk yesterday, May 2.

"It was February na sinabi nila na they were ready to get married," said Noel. "So, first thing was to contact the wedding planner. It was such a challenge kasi destination hindi sa Manila, e. Tapos para kang nag-treasure hunt."

Noel also revealed that Judy Ann and Ryan wanted to get married while they're still at age 30 (Ryan turned 30 last April 10 and Juday will turn 31 this coming May 11). Another of Noel's revelations was that the couple consulted an astrologer, who said that the ideal date for their wedding was April 28. "Pinakamagandang date dahil sa planetary arrangements," said Noel.

The officiating priest was Fr. Tito Caluag. The matron of honor was Juday's friend and Megastar Sharon Cuneta. The best man was Ryan's brother Dondee Agoncillo and the flower girl, Juday and Ryan's adopted daughter Yohan.

SURPRISED GUESTS. Juday's manager Alfie Lorenzo, one of the guests, on the other hand, got no details on the invitation and was even clueless about where the wedding was to be held. "Ni hindi nga sinabi sa akin," Alfie said. "Sabi ko, 'Sa'n ba tayo?' Sabi, 'Secret! Sunduin na lang po namin kayo sa Lunes. Dadalhin kayo sa lugar.' Hindi ako aware."

Alfie no longer feels any bitterness towards Juday and Ryan. But is it true that Alfie is retiring as Juday's manager?

The card had just an embossed JR emblem and, as Noel would say, if you knew Juday and Ryan, you would immediately call them and ask if the invitation really was it.

Suzi added that they were only 80 people in all at the wedding. She observed that Ryan was excited and, although solemn, the couple had some playful moments together. It was beautiful!

"Ogie Alcasid and Regine Velasquez sang 'The Prayer,'" Suzy added. "Si Agot Isidro sang "The Wedding March." Sharon, KC Concepcion, and Sen. Pangilinan were all there, although the couple had to leave sooner. KC stayed to the end of the party."

SOLEMN WEDDING. Juday and Ryan only wanted a solemn wedding and that was the first thing they requested, said Noel.

The sponsors, who were chosen friends and relatives, were the only people invited to the wedding. Other guests were invited to the reception in Anilao, Batangas, a two-hour drive from the church.

After the wait, Juday and Ryan arrived in a boat. When they got off, they kissed and hugged each other for all the guests to see, Paolo narrated.