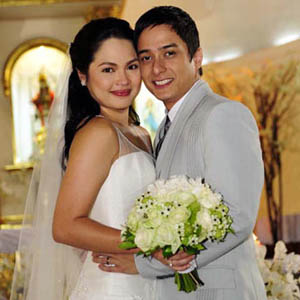 Juday, who was laughing in the first few seconds after she answered the phone, was immediately asked by Lolit as to what they were doing that very moment. "Bakit ganyan tawa mo, Juday? Parang liga-ligaya mo?"

After the laughs died down, Joey asked Juday what she and Ryan felt after they accomplished their private wedding.

Juday added that there was no march of the entourage and the only people who walked down the aisle were Sharon Cuneta (Matron of Honor), Juday's adopted child Yohan (flower girl), and Juday herself.

Kidding aside, Juday said that her parents were very civil and she was thankful that they were all together. "Natupad na din ang wish ko na magkaroon kami ng family picture," Juday gaily said.

Juday further explained that the reception held last night, May 2, was for both networks ABS-CBN and GMA-7) and all reporters who helped them along the way and for all friends.

After the laughing died down, Lolit remarked that a TV host was saying a lot of things about Juday and Ryan and it was something Mommy Carol was upset about. What is Ryan's take on this?

Joey's joke hit its mark as all laughed at his joke. On a serious note, Joey asked if there was now a limitation on what projects Juday or Ryan would accept.

How about the honeymoon? Was their plan to have a honeymoon in Mexico cancelled because of the Swine Flu?

Is it true that Ryan is now trying to have kids with Juday?

MOMMY CAROL. Juday was informed that Mommy Carol was quite saddened now that her daughter is married and that she is now alone. What is Juday's reaction with this?

Has Mommy Carol informed Juday about her plan to leave for Canada?