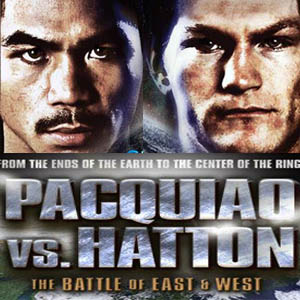 Manny Pacquiao gave Ricky Hatton the surprise of his life when he thrashed the Briton by using his right-hand cross instead of the usual left.

It took only less than two rounds for Pacman to knock down Hatton. The British fighter didn't even have time to realize what hit him, and thousands of excited Britons who watched the fight inside the MGM Grand Arena were suddenly silenced on seeing the swift defeat of their hero.

Before the win, Pacquiao won the WBC flyweight belt, the IBF super bantamweight title, the WBC super featherweight crown and the WBC lightweight championship. With this victory, he retains his title as the world's pound-for-pound boxing king.

Now, that is amazing.

The British crowd easily overpowered the Filipino and American fans combined in terms of cheers and taunts as Ricky made his glittery—he was wearing a sparkly windbreaker—entrance with his entourage. The walls of MGM Grand in Las Vegas echoed with his name chanted by the Britons numbering in the thousands.

Manny, who made his entrance wearing a white, red, and blue robe, was accompanied by his entourage and WWE professional wrestler and Fil-Am Batista.

Below is a summary of each round of the fight:

The round starts off with Manny giving Ricky a welcome jab to face, and then immediately going under to defend himself against Ricky's retaliatory attack. Ricky's answering jab lands on nothing but air as the two fighters move to the center.

Manny gives a right cross but it lands just a couple of inches to Ricky's face. Ricky retaliates but ends up with nothing. Manny continues his assault with a jab but misses his target. Ricky, sensing the power in Manny's jab quickly inches away from Manny then attacks with a right cross.

Manny answers back with his own right cross and it connects to Ricky's head. Undeterred, Ricky jabs and Manny just weaves out of harm's way.

Manny once again gives Ricky a right cross and the two then exchange blows. Irked by now, Manny unleashes four quick punches to Ricky, who hits the floor with a loud thud.

Forty-four seconds to go in the fight but Manny is still itching for a fight. To his delight, Ricky gets up. A combination by Manny ends up with nothing as Ricky weaves out of the way. Ricky gives Manny his own combination but nothing happens. A left by Ricky does not land and Manny answers with a right cross that once again sends Ricky to the ground.

The round ends with Ricky hitting the floor twice.

Round 2 starts with Ricky lunging forward with a jab but Manny easily evades. Now, Manny is taking his time and being cautious. After some time, both meet up with jabs and after that, Manny uses his combination once again but Ricky evades with ease.

Many may have noticed that Manny is using his right hand—which is odd since Manny is a lefty. Manny's two left hooks on Ricky's head lands home and a quick left uppercut to Ricky's chest takes his breath away.

Recovering from the blow, Ricky stops his advance, allowing Manny to move forward. The two exchange combination punches that leave both of them with nothing. And then, Manny takes the offensive and gives Ricky two solid straights to the head. Ricky fires back with a hit of his own to Manny.

A body shot by Manny opens up Ricky's defense. Manny, who has been using his right cross all night, suddenly unleashes his left punch that connects to Ricky's jaw—the Briton crashes to the ground!

The third knockout by Manny officially seals his win against Ricky.