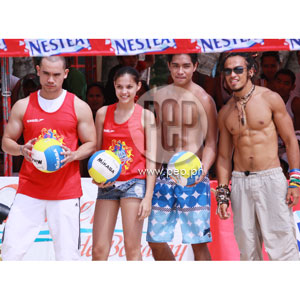 Kapuso stars like Iza Calzado, Alfred Vargas, and Rhian Ramos graced the event along with some of the former castaways of Survivor Philippines­. Among them were first Pinoy Sole Survivor JC Tiuseco, Survivor runner-up Rob Sy, Jace Flores, Kiko Rustia, Nikki Dacullo, and Vern Domingo. Sexbomb dancer Lian Paz also attended the event to cheer for her boyfriend Paolo Contis who participated in the event.

The celebrity beach volley challenge was held over two days, May 8-9, in front of Hey! Jude restaurant at D'Mall in Boracay.

Aside from the beach volley event, a fashion show featuring fashion designer PJ Arañador took place on the second night of the 4-day Nestea Fit event. Different summer outfits such as boardshorts, beach dresses, pants, and shirts were showcased. There were also accessories like beach hats, bandannas, necklaces, and even plastic bags.