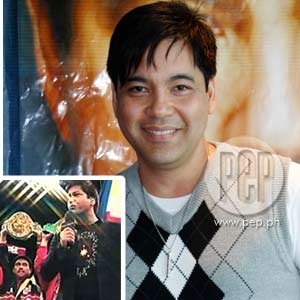 The National Historical Insitute (NHI) asked a public apology from Martin Nievera for not singing the national anthem properly before the Manny Pacquiao and Ricky Hatton fight last Sunday, May 3.

The Concert King sang the first stanza slowly, then shifted to a marching beat up to the last line where he did a "birit."

The National Historical Institute (NHI) did not like the way Martin sang the Philippine national anthem.

According to the law, "Lupang Hinirang" should be sang like a marching song. The Republic Act 8491, Sec. 37 futher states: "The rendition of the national anthem, whether played or sung, shall be in accordance with the musical arrangement and composition of Julian Felipe."

Atienza said that no one asked for their approval on Martin's rendition of "Lupang Hinirang." In fact, he said, "Nagtataka ako nang nag-open yung laban, may nilagay sila na approved by the NHI, e. Wala silang hininging approval sa NHI."

Hence, Atienza said that Martin should make a public apology.

NO APOLOGY. Martin, on the other hand, felt sorry that some people were not pleased with his rendition of the national anthem. In a phone interview, he said: "Well, it's gonna be hard for me to apologize for something that I am not sorry for. I did not ask to do the anthem. Manny Pacquiao himself asked me to sing the national anthem.

"It was my honor to be blessed with this awesome responsibility and I have no one to apologize to because Manny asked me to sing this song. Obviously, he wants me to sing it the way I would sing it. I didn't change any of the notes. I did not make it R&B," he explained.

Aside from public apology, the law also states that: "Any person or judicial entity which violates any provisions of this Act (Republic Act 8491) shall, upon conviction, be punished by a fine of not less than Five thousand pesos (P5,000.00) not more than Twenty thousand pesos (P20,000.00), or by imprisonment for not more than one (1) year, or both such fine and imprisonment."

The NHI also warned other singers about the wrong way of singing the national anthem. The Institute already called the attention of Charice Pempengco and Jennifer Bautista. The government office usually takes Lea Salonga's rendition as an example of the right way of singing the "Lupang Hinirang."

It can be recalled that Lea volunteered to sing the Philippine National Anthem at Pacquiao's fight against Hatton, but the Pinoy boxer already promised Martin first.