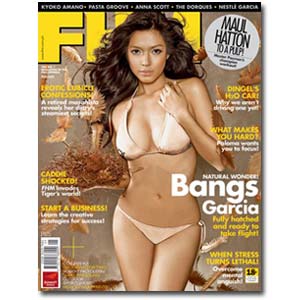 “Matagal ko nang naisip na mag-pose sa FHM.I was still in Let’s Go, but there was no way to pose in a men’s magazine before because I was in a youth-oriented show,” says Bangs Garcia.

When Valerie “Bangs” Garcia started in show business, no one even knew what she really looked like—her character in the youth-oriented show Let’s Go had bangs that covered her face so that only her nose and lips were seen.

FHM readers will be glad to note that none of the above is true, as Bangs shows off her voluptuous frame in a cover shoot that has her emerging from a nest, fully hatched and ready to take flight. It is a cover that Bangs was ready for, long before she lost the bangs.

“Matagal ko nang naisip na mag-pose sa FHM.I was still in Let’s Go, but there was no way to pose in a men’s magazine before because I was in a youth-oriented show,” she explains.

Since tackling a more mature role in the primetime series Palos, accepting a liquor endorsement, and now playing a kontrabida role in ABS-CBN’s Kambal sa Uma, Bangs is now ready to make the jump to the sexier side of the business.

“I can be sexy without even showing flesh,” she tells FHM, “For me, sexiness depends on how a woman carries herself… A woman is sexy because she’s smart, because of the way she speaks. Kasi it shows, dun nagre-reflect yung personality ng babae.”

See Bangs in the flesh at herFHM Autograph Signing session on May 9, Saturday, 6:00 to 8:00 P.M. at the Robinsons Supermarket in Robinsons Galleria. Make sure you grab your copy of the May issue of FHM, available in newsstands, bookstores, and supermarkets nationwide. For more of FHM online, visit www.FHM.com.ph.