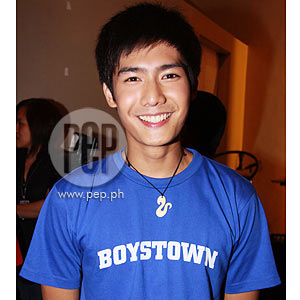 Among the Pinoy Big Brother Teen Edition Plus housemates, second placer Robi Domingo is the most visible. He's grateful that he continuously receives projects from his mother station, ABS-CBN. "Masasabi ko lang, I'm very blessed and thankful to God for all his blessings," he adds.

Pinoy Big Brother Teen Edition Plus first runner up Robi Domingo is excited for the premiere of his new regular show, the mini-series called Your Song Presents: Boystown on Sunday, May 10.

The 19-year-old MYX veejay also expressed how happy he was because he's not only doing a guest role in this show. It can be remembered that as Vincent, Robi had a short appearance in the Philippine adaptation of the Korean drama series My Girl, which topbilled the young loveteam Kim Chiu and Gerald Anderson.

"Expect Vincent from My Girl to evolve to Arkin na," said Robi when asked what viewers can expect from him in this show, after the press conference of Boystown last night, May 5, at the Party Venue in Scout Tuason, Quezon City.

Do you think you can pull off such character since it's exactly the opposite of yourself?

WORKING WITH GIGGER BOYS Aside from having his first regular TV series, Robi is also grateful that he will be working with his fellow Gigger Boys namely Enchong Dee, Sam Concepcion, Dino Imperial, AJ Perez, Aaron Villaflor, and Chris Gutierrez.

Although there will be seven actors who will topbill the show, he clarified that they will be given equal parts in this mini-series.

The young celebrity also cleared that there will be no personal rivalry between him and Enchong Dee, since Arkin will be a villain to the former's character. "Enchong and I, we're good friends. We support each other lalo na sa rehearsals, nagpapaturo ako sa kanya, minsan nagpapaturo siya sa akin."

He even described how close he is to his groupmates, "Ayos naman kami, wala namang inggitan, wala namang kahit anong away."

Catch the all-male dance group Gigger Boys in the TV adaptation of the 1981 movie Boystown in Your Song Presents this Sunday, May 10, after ASAP '09.