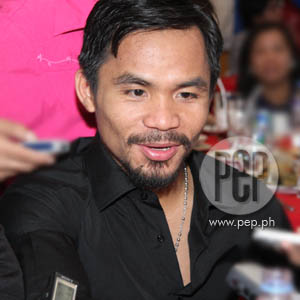 The Department of Health urged boxing champ Manny "Pacman" Pacquiao and his team to postpone their return to the Philippines until next week because the virus was found to have spread in Los Angeles.

The May 8 national celebration for current IBO and Ring magazine's light welterweight champ Manny "The Pacman" Pacquiao may have to wait until Monday or any day next week. This, after Department of Health (DOH) Francisco Duque III urged Pacquiao to postpone his triumphant return to the Philippines—after knocking out Ricky "Hitman" Hatton in their lopsided match last May 2—to help prevent the spread of swine flu from the United States.

According to Yahoo! Sports, Health Secretary Francisco Duque III told reporters the World Health Organization (WHO) made the "strong recommendation" for Pacquiao and his entourage to remain in Los Angeles and observe self-quarantine until next week because the virus was found to have spread in that city.

Executive Secretary Eduardo Ermita, senior member of President Gloria Macapagal Arroyo's Cabinet, said he spoke with Pacquiao, who has not yet decided whether to postpone his return or to fly back Friday (May 8) as planned and then go into self-quarantine.

Ermita said the "national day of celebration" for Pacquiao, originally set for Friday, will be postponed to Monday (May 11), depending on Pacquiao's decision.

Duque said there are concerns that Pacquiao's motorcade in Manila and other parts of the country could pose a risk of spreading the virus if he or anyone in his group is infected. The Philippines has yet to confirm its first case of swine flu. Duque said the WHO has reported a "third-generation human-to-human transmission" of the virus in Los Angeles, citing the case of a Mexican who infected another individual, who in turn contaminated a third person.

"Since Manny Pacquiao is in Los Angeles... it is better to be conservative," he said. "Part of our message to them is that beginning today, they shouldn't be going out anymore. They should impose self-quarantine."

He said health authorities have been trying to contact Pacquiao to try to convince him and his party not to fly back to Manila earlier than Tuesday because it will take about five days for the symptoms to appear.

"What we have to do is to convince them the best way we can. I cannot imagine that they will refuse," he said.

Pacquiao, his wife Jinkee, mother Dionisia, and others in his entourage drove from Las Vegas to Los Angeles to celebrate his second-round knockout victory Sunday over Hatton.

POUND FOR POUND KING. His current victory over the hard-hitting Hatton, has cemented his position as the No. 1 Pound for Pound boxer in the World, an honor given to him by Ring magazine, regarded as the "Bible of Boxing."

The Ring magazine's Pound For Pound rating is deliberated by an elite panel of boxing experts from different parts of the world. The honor is given to a boxer whom the panel believes is the best boxer in all the weight divisions in boxing.