Zaijian Jaranilla of May Bukas Pa remains unaffected by his fame 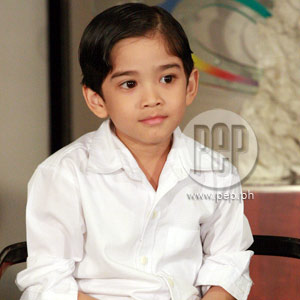 Child star Zaijian Jaranilla wants to be a doctor in the future. "Para po makatulong sa mga batang may sakit," he said. The 7-year-old actor is the lead star of ABS-CBN's hit primetime series, May Bukas Pa .

May Bukas Pa lead star Zaijian Jaranilla was given a solo press conference by his home studio, ABS-CBN, last May 6, affirming his current status as the network's most promising child star.

The seven-year-old "miracle boy" has won the hearts of the primetime-viewing public through his effective and touching portrayal of Santino. Starring in a hit series coupled with throng of adoring fans (mostly doting mothers) did nothing to change the young boy's outlook.

While Zaijian remains unaffected by fame, his one concern is typical of any contemporary child star. "Hindi na po ako nakakapasyal sa mall," he timidly confided to the members of the entertainment press.

Other than that, life is pretty much the same for Zaijian, according to his 28-year-old father, Zenon.

The Jaranillas continue to reside in their modest two-bedroom house located in Quezon City together with a few cousins and Zaijian's grandmother.

ROAD TO PRIMETIME TV. Before gracing primetime television, Zaijian started by auditioning for TV commercials. Some of his boobtube advertisement gigs include McDonalds, Lactum, and Tide.

Having a regular primetime show has made Zaijian—despite his indifference when it comes to his popularity—a household name. Even veteran actors like Comedy King Dolphy and Susan Roces are said to be very fond of the budding child star.

Ethel described Zaijian as an active child who loves to play and horse around behind the camera.

It is perhaps a tribute to Zaijian's natural acting skill that some are led to believe he and his character Santino are one and the same.

Zaijian relayed an interesting incident during a taping.

A big-screen debut is highly possible, but Zaijian himself would rather take his time and finish pressing commitments before taking another leap.