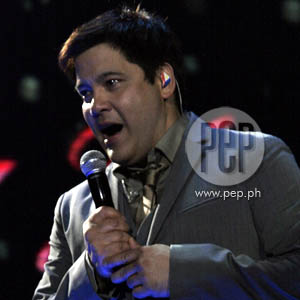 "Hindi ko naman binastos yung kanta. I mean, I don't think I did. I tried to—not naman stylize it—but I tried to have the song made in a way na makikinig yung buong mundo. Hindi lang yung mga Pinoy, hindi lang yung NHI!" says Martin Nievera about the controversy arising from his interpretation of the Philippine National Anthem at the Pacquiao-Hatton fight.

"Controversy? Ain't nothing new to me," umpisa niya sa PEP (Philippine Entertainment Portal). "I've always been in some sort of in hot water here. The only thing about it is, it kinda disappoints you. You did something for your country... The name of the fight is 'East vs West.' It's not 'East vs East' and that's the sad thing.

"There's even a rock-and-roll version of the song that I hear about. I think it's RJ Jacinto, [he] has a rock and roll version. All the singers who sang before me sang their interpretation. There's a very fine line between what we should do and what you wanna do for as long as you don't do it in a bad way.

Dagdag niya, "I don't know how many Filipinos or Filipino singers really know or memorized the lyrics. I studied the song every night and I broke it down. I try to get it bit by bit, pitch by pitch. From what I know, from what I read in the Internet, it's formally a Spanish poem that was interpreted as a Tagalog song. So why can't we all give our interpretation if they could have done it a hundred years ago? We can do it now.

"I wanted to tell a story. I wanted to show my pride and my love for my country and to be a Filipino, because our Filipino fighter [Pacquiao] is just about to fight, so I didn't just wanna sing the song like it was a recording or like a robot. If everyone sings a song, I don't care who the singer is. Everybody sing the song same way all the time, e, di mag-CD ka na lang!

"I've seen so many of Manny's fight and I've seen the other fans booing the National Anthem. I also saw on the Internet that the British fans were booing during the American Anthem, during the [Floyd] Mayweather [Jr.] fight. I'm trying to prepare for that. That's why I wear ear monitors. That's why I asked for minus one, and not a capella para maririnig mo talaga yung song.

"A lot of people, they are being faulted for being out of tune. They want the song to be a march, not a slow ballad. So I tried to put the slow ballad and the march together para masaya yung lahat. I was trying to please everyone. Obviously, I didn't please everybody.

"The reason why I ended the song on a very high note is so that I can be heard over the usual boo. Or sa lahat ng mga Pinoy, alam nila yung kanta, kilala nila yung 'Lupang Hinirang.' So they know the ending is coming, so sisigaw na sila, hindi na nila maririnig yung pinakadulo. Yung, 'Ang mamatay nang dahil sa 'yo.' That's the most powerful line of the song... That's why I ended it high," mahabang paliwanag ni Martin.