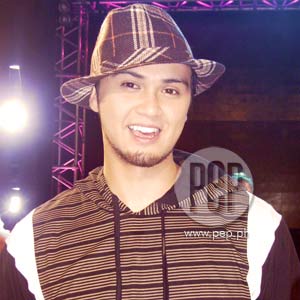 Billy's "Fly" scent is like an "extension of himself." Its woody fresh scent suits his character and body chemistry.

With his latest endorsement, Billy Crawford is really gonna "Fly"!

Last May 17, exactly a day after his actual birthday, Human announced that Billy will represent their latest scent, Fly, at the Trinoma Activity Center in Quezon City.

The term actually has a double meaning. In the hip hop/urban jargon, it means "hip." Fly can also mean "energy," "passion," and "confidence"—about being high in spirits and going beyond the norm. Billy played a significant role in the development of the Fly EDT—from selecting the name to the final fragrance to the packaging design.

Ben Chan, who was right in front of the stage, just answered Billy with a big smile.

Billy recently released under Universal Records his newest album, Groove, which is predicted to hit Gold status in less than two weeks. He's currently finishing an album that is intended for release in France.

He told PEP, “Right now, may album nga ako rito, it’s a cover album for Universal Records. It’s for me and for the Filipinos, but I’m actually recording now pa rin, for the couple of people from the States. Minsan pumupunta sila rito, pinapadala ko. We have, I think, two or three songs on the way to France.

“France, I think, is another territory. Again, they asked me to come back. Mahirap din mag-decide kasi, you know, once na ma-in-love ka sa 'Pinas, ma-in-love ka rito, hindi ka na aalis. You will stay as long as you want."

Before the event ended, Billy acknowledged the presence of Bench’s pioneer celebrity endorser, Richard Gomez, who came with his wife Lucy Torres-Gomez and their daughter Julianna.