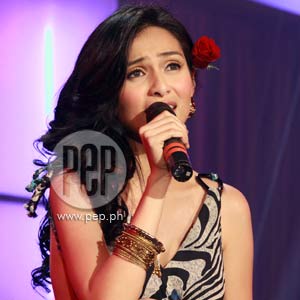 Jennylyn Mercado dismissed the rumor that she and longtime manager Becky Aguila are having a rift. Some believe that the supposed conflict prompted the singer-actress to be a no-show at all the promotional activities lined up to plug her birthday concert.

As the controversial singer-actress fled the stage after delivering her rendition of Christina Aguilera's 2002 hit single "Beautiful," people close to her had an obvious look of relief flashed on their faces—pleased and happy, perhaps, that the occasion ended without incident.

The events leading to the concert were marred with confusion as the StarStruck alumna blew all the promotional efforts intended to plug the concert. Jennylyn was reportedly nowhere to be found by her own manager, Becky Aguila, last weekend. The actress missed out on two important television appearances and a mini-press conference in Quezon City.

Becky had told the entertainment press that her ward was untraceable since mid-afternoon of May 9.

In a separate interview, however, held last May 11 at the taping of the afternoon drama series Paano Ba Ang Mangarap?, Jennylyn told a few entertainment reporters that she was just resting at home throughout the weekend. Becky was aware, insisted Jennylyn, that she was feeling ill, and this made it difficult for her to honor all scheduled commitments.

NO BAD BLOOD. PEP did not see Becky inside the Music Museum concert last night. Even the show's director and public-relations point person, Calvin Neria, was not sure if Becky watched the concert. He mentioned, however, in a text message to PEP that Becky's daughter was present from the opening number to the finale.

In a short interview backstage after the concert, Jennylyn denied that she and Becky were in the middle of a professional dispute involving money.

She remains firm, though, in sticking to her story regarding her sudden disappearance last weekend.