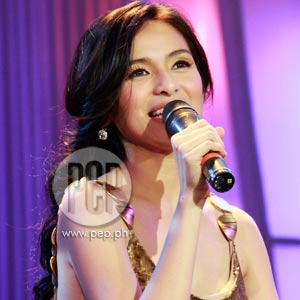 Jennylyn Mercado describes her birthday concert titled I Am Woman as a celebration of her life. Last night at the Music Museum, Jennylyn made good her promise as she successfully staged I Am Woman in front of fans, supporters and family.

The controversies that plagued the promo of I Am Woman threatened to overshadow the fact that the concert was conceptualized to showcase Jennylyn Mercado's reinvention as an actress and singer.

Last night, May 14, Jennylyn reminded the public exactly that as she successfully staged her birthday concert at the Music Museum in San Juan, Greenhills.

To her credit, Jen looked unaffected by whatever personal matters she's currently dealing with as she breezed through her set consisting of dance, pop, OPM well-loved hits, and standard tunes.

Musical director Naldy Rodriguez commended Jennylyn's repertoire days before the concert by saying, "Her choice of songs is different and surprising compared to other concert artists. She really sings from the heart. You can feel the soul and emotions coming out whenever she sings."

A LIFE TOLD THROUGH SONGS. Jennylyn opened the evening with Chaka Khan's 1978 groundbreaking single, "I'm Every Woman" (the song was revived and even more popularized by Whitney Houston in 1993) before jumping into Britney Spears's recent single, "Circus."

Jennylyn played the part to the hilt as she emerged clad in tight leather pants and a pair of high-heeled boots to symbolize her newfound confidence as a woman. The first StarStruck winner proceeded to sing the title track of her afternoon drama series Paano Ba Ang Mangarap?.

The evening's set list was a potpourri of modern to standard tunes chosen by the birthday celebrant herself. Jennylyn reportedly picked the songs painstakingly with the intention of choosing the right material that would best describe her life and its various stages.

Some of the tunes performed alone by Jennylyn include "Starting Over Again," "Piano In the Dark," "Can We Just Stop and Talk Awhile," "Reaching Out," "Don't Know What To Do," "Again," "Every Time," and MYMP's "Now."

Jennylyn was joined by her guests in performing "Jai Ho," and "When I Grow Up" (with Jasmine Fitzgerald), "Lucky" (with Christian Bautista), "If Ever You're In My Arms Again" (with Nico Antonio), "Always" (with Jay-R), "Pagdating Ng Panahon" (with Mark Herras), and "Kahit Maputi Na Ang Buhok Ko" (with Richard Poon).

Janno Gibbs and Ogie Alcasid drew loud applause from the audience as they separately performed with Jennylyn. "It's so hard to find a voice na match sa 'yo at maganda ang blending n'yo in recording and I found that in Jennylyn," complimented Janno. The two performed "If I'm Not In Love" and "Moments of Love."

EMBRACING MOTHERHOOD. One of the evening's most touching moments was Jennylyn's rendition of Sarah McLachlan's tender "In the Arms of an Angel," which she dedicated to son Alex Jazz or AJ.

With I Am Woman over, Jennylyn is said to be preparing to unveil a coffeetable book titled Reborn. The book will reportedly feature previously unpublished photos of the actress-singer and AJ, complete with stories documenting Jennylyn's journey towards motherhood.