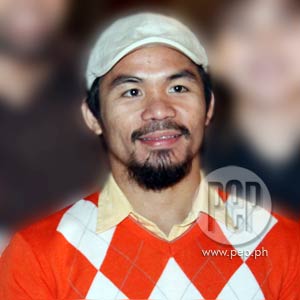 The pound-for-pound king shares with PEP the best fights of his entire career. Out of the five matches, two stand out in his memory.

Manny "Pacman" Pacquiao demolished some of boxing's greatest inside the ring with his simple yet effective southpaw style in punching, matched with lightning reflexes. Manny has been punching his way up to sports celebrity status since 2001 when he had his big break in grabbing the crown of IBF Super Bantamweight champ Lehlohnolo Ledwaba by technical knockout. He has faced some of the toughest opponents the boxing world has to offer such as Eric Morales and Marco Antonio Barerra. His bouts with these and others have paved the way for Manny to become the best of the very best, in his weight class, at least.

Of course, all of Manny's fights are his best, but we here in PEP wondered if the pound-for-pound king has filed some of his fights under his "Favorites" category. And so, last May 22, during the Pacman's party at the Renaissance Hotel in Makati, we cornered the boxing icon to ask about five of his best fights.

Oscar de la Hoya. Manny talked about his fight with American boxer and Olympic gold medallist Oscar de la Hoya more than any other foe. Small wonder it was that fighting against (and winning!) an American world champion in six different weight classes was worth remembering.

Manny and Oscar's December 6, 2008 non-title bout at the MGM Grand in Las Vegas was considered one of Manny's career-clinchers as it pitted him against the 1992 Olympian and who, by far, greatly outdid him in terms height, reach, and experience. Oscar was highly favored by boxing experts and analysts who predicted that he would win against the Filipino fighter. On the 9th round, however, Manny won by TKO (Technical Knockout), catapulting himself to iconic status.

"The greatest fighter 'yon, eh," Manny said when asked why the De la Hoya fight was the best.

David Diaz. His fight against David Diaz, according to Manny, was the turning point of his being a fighter and this he proved when he knocked out the Lightweight champion in the 9th round and took the Lightweight belt last June 28, 2008.

This is considered one of the best fights for Manny since it had been three years since David was TKO'ed (he lost to Kendall Holt back in 2005). Also, David was a member of the 1996 Olympian team as well, so it was a great honor for Manny to have defeated one of the best of the United States.

Erik Morales. The trilogy of the Pacquiao and Morales fights was one of the most eagerly anticipated fights ever during the 2005-2006 period that gave boxing fans value for money.

Their first fight back in March 19, 2005 gave Filipinos the shock of their lives when Erik, the underdog, defeated Manny by a unanimous decision. It was a beautiful fight with over 12 rounds of pro boxing at its finest.

Ten months after their first fight, Manny redeemed himself by knocking down Erik twice in the final seconds of the tenth round and it evened the odds to 1-1. People, who are by now hungry for a last bout between the two to determine who indeed was the better boxer, got their wish when the third and final fight occurred ten months later, on November 18, 2006. This time, Manny proved that he was the best by demolishing Erik in round three with a crushing left hook.

Ricky Hatton. Pacman's latest fight was a definite letdown for fans as it ended as fast as his jabs. This fight marked the introduction of Manny's ambidextrous (and a highly efficient) style in boxing, a feat where his powerful southpaw (lefty) style is now a thing of the past. Being an ambidextrous fighter would pose some difficulties for Manny's future challengers as they would know that Manny's right is now as fast, deadly, and accurate as his usual left.

The fight, which Manny ended with a knockout-left in the second round, sent the British opponent crashing to the canvas with a loud thud, much to the disappointment of the British crowd. The power behind both of Manny's fists surprised everyone as he unconventionally used more of his right hand than his left. This new fighting style opened the door for new strategies, making Pacman an unpredictable fighter.

Right now, the Pacman is planning to beat Hatton again, this time in a game of darts. "Actually, we invited Hatton in L.A. doon sa dart tournament," he told PEP. "It's an international tournament."

Juan Manuel Marquez. Manny's two fights with Marquez was laced with controversy since both ended with questionable decisions that became the subject of debates on who performed better.

The first fight between Manny and Juan took place in May 2004. Though knocked down three times in the first round by Manny, Juan moved on to control the fight, which ended in a draw.

Three years later, on November 29, 2007, Manny defeated Juan and claimed the Mexican's Super Featherweight title through a split decision. Many believed that Juan gave a more efficient performance though the judges saw that Manny's knockdown on Juan proved to be the Filipino's ticket to the win. There was supposed to be a part three but Manny announced that he would be going up a division (Lightweight).