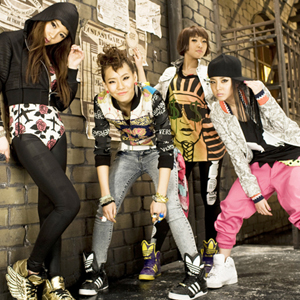 After the May 6 digital release of "Fire," their first single, Sandara Park and her girl group 2NE1 (pronounced "twenty-one"), performed last May 17, Sunday, at the South Korean TV show SBS Inki Gayo.

Korean fans of the group, who were composed mostly of teenage girls, were in full force screaming for CL (Lee Chae Rin, 18), Bom (Park Bom, 25), Dara (Sandara Park, 25), and Minzy (Gong Minji, 15) during the group's performance. Some even sang along with the group's song "Fire" while cheering for them.

Last May 6, YG Entertainment launched the "space" (click here) and "street" (click here) versions of the "Fire" music video. The videos each received over a million views on YouTube in just one day and were even featured in Hollywood blogger Perez Hilton's blog.

Before their first live performance, 2NE1 was dubbed as the "female version of Big Bang," the popular Korean boy band whom 2NE1 got the chance to work with in the RnB-dance song "Lollipop" for a cell phone TV ad (click here). 2NE1 was also hyped as the next big thing in K-Pop.

Fans of the group gathered news items and interviews of 2NE1 after their first live performance. They translated and posted some of it in their blogs for non-Korean speaking fans.

Blogger sookyeong@kbites translated a news item from the Korean lifestyle and entertainment website Newsen. The site reported how excited and nervous the girls were during their performance in Inki Gayo.

"The first broadcast was like a day of dreaming for us. We did our best to bring out a different feel with 'Fire' after 'Lollipop.' We went through a lot to bring out our own styles on stage," collectively said 2NE1 in their Newsen interview.

Blogger ming*ming@soompi, on the hand, translated the girls' frustration in their performance in their Star News (Korean showbiz site) interview. "After finishing the first debut stage, we think we still have a lot of deficiencies. We will practice more on singing and dancing," the girls said.

However, they acknowledged the presence of their fans who gave them a lot of encouragement during their performance. "There were 1000-plus fans that came to the debut stage, and that has given us a great impetus. In order to repay the fans' support, we will bring about the performances that even ourselves are satisfied with in the future."

2NE1 is the brainchild of YG Entertainment president Yang Hyun Suk. The group was first mentioned by the Korean press in late 2008, when rumors were spreading that YG was creating a female version of Big Bang named Sista.

In response to those rumors, Hyn Suk confirmed they are indeed coming out with a "female version of Big Bang" but has no name yet for the group. Hyun Suk said YG has been training young girls for four years for this group and now has chosen YG trainees CL, Bom, and Minji as the first members of the group.

Sandara, returning to South Korea after her unsuccessful comeback in Philippine showbiz, was later signed by YG as a trainee and was chosen as the final member of the girl group that was first known as "21."

However, when YG discovered there is another artist using the name 21, they changed the spelling of the group's name to 2NE1.

For the video of 2NE1 debut live performance, click here.