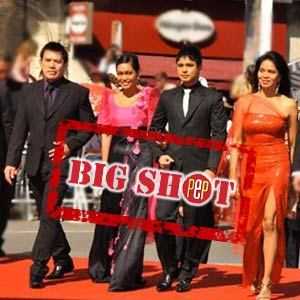 (From left) Brillante Mendoza, Mercedes Cabral, Coco Martin and Maria Isabel Lopez attended the world premiere of Kinatay in France last May 17. On May 24, the film earned for Direk Brillante the Best Director award.

A crime film about a "chop-chop" lady has earned for Brillante Mendoza the Best Director plum at the Cannes International Film Festival.

The Filipino director of Kinatay (The Execution of P) was able to beat renowned filmmakers like Quentin Tarantino (Inglourious Basterds)and Ang Lee (Taking Woodstock) under the same category.

Mendoza is the first Filipino to win Best Director at Cannes for a full-length film. Mendoza made his debut at Cannes last year with Serbis, which was also In Competition.

Kinatay tells the grisly fate of a kidnap-rape victim (played by Maria Isabel Lopez) who is beaten up before she is murdered and hacked to pieces.

Twenty films competed for the highest honor of Cannes, the Palme d'Or (Golden Palm Award). The prestigious award went to Austrian director Michael Haneke for Das Weisse Band (The White Ribbon) while the Grand Prix award was given to French filmmaker Jacques Audiard for Un Prophete (A Prophet).

The Jury Prize was shared by the films Fish Tank directed by Andrea Arnold and Bak-Jwi (Thirst) directed by Park Chan-Wook.

It is interesting to note that Filipino actress Mercedes Cabral played important roles in two award-winning films at Cannes. She was handpicked to portray a Filipina married to a Korean in the vampire film Bak-Jwi and she played the wife of Coco Martin in Kinatay.

In the Un Certain Regard section, the film Police Adjective of Corneliu Porumboiu (Romania) took the top jury prize. Raya Martin's Independencia, a historical drama starring Sid Lucero and Tetchie Agbayani, is the Philippines' first entry to this section.

Adolfo Alix Jr. and Raya Martin's Manila, starring Piolo Pascual, was one of 10 films given a special screening but it did not compete in Cannes.

Aside from the aforementioned three full-length Filipino films, two short films also participated at Cannes 2009. These are: Sabongero directed by Filipino-American Janice Perez and the animated short Manong Maong helmed by Aissa Peñafiel and Miguel Ocampo.

Here are the other winners chosen by a jury headed by French Actress Isabelle Huppert: