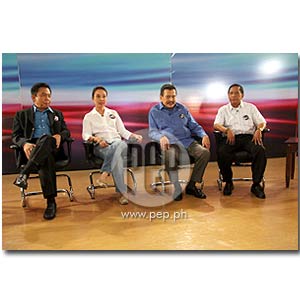 Three of the four presidential aspirants present during the second ANC Leadership Forum held in UP Diliman last June 5 said the Senate probe on the Hayden Kho sex-video scandal is necessary to improve Philippine legislation on cyberspace pornography.

Senator Loren Legarda, Makati Mayor Jejomar Binay, and former president Joseph "Erap" Estrada were all for the ongoing Senate investigation. MMDA (Metro Manila Development Authority) Chairman Bayani Fernando, on the other hand, said the inquiry must be left to the courts.

Critics had disparaged the Senate for wasting time and tax money on that May 28 inquiry on the sex-video scandal, which others deemed as an issue of "no national concern." Senator Bong Revilla, who called Hayden "a pervert of the highest kind" in an earlier privilege speech, was also criticized for "grandstanding and electioneering."

The scandal grabbed headlines when videos of the sexual exploits of cosmetic surgeon Hayden Kho with at least three women, including sexy actress Katrina Halili, surfaced on the Internet.

In the forum, Sen. Legarda said "Mahalaga na imbestigahan ito ng Senado, which is not for gaining headlines or to excite the already-excited public. It is all in aid of legislation, so the use of computers for pornography might not happen."

Legarda added that the ongoing probe will help pass into law the pending Senate Bill 1375, or the "Anti-Computer Pornography Act," which she filed two years ago. The bill seeks to prohibit individuals from using computers to transmit any indecent or pornographic material to minors.

Mayor Binay, on the other hand, stressed the importance of "anticipation" more than the "reaction." This entire brouhaha wouldn't have happened if the government had already foreseen its severity, especially that Internet has become a powerful medium in the country.

Meanwhile, MMDA Chairman Fernando mentioned there are already existing Philippine laws addressing these kinds of issues, and that a Senate inquiry prosecuting the perpetrator of the sex scandal, therefore, becomes inconsequential.

Former president Estrada's rejoinder had the crowd cheering and laughing.

"But joking aside, dapat i-ban 'yung mga [videos]. Dahil yung mga kabataan, they should concentrate on books, on study..."

The ANC Leadership Forum is part of the ABS-CBN initiative "Boto Mo, iPatrol Mo: Ako ang Simula," which aims to convince the youth to be actively involved in the national elections next year.