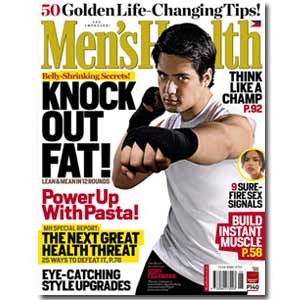 “I box at least 3-4 times a week. Pag may free time talaga ako, every day. Ready to compete in the amateurs ako. Hindi lang puwede because of work. [But] pinipilit ko nga ang manager ko that I want to fight. I really want to fight," reveals Geoff Eigenmann in his interview with Men's Health.

Many can still remember Geoff Eigenmann when he was at his heftiest. “Umabot ako ng 230 pounds, my heaviest, about six or seven years ago—as in bilog talaga ako,” Geoff tells Men’s Health in the June issue, “I was athletic, into a lot of sports, but I really loved eating. So losing weight was really hard, kasi I had to cut down on everything.”

Geoff credits his weight loss to his love for Ultimate Frisbee, which he played for two years. Today, he shares with Men’s Health another sport he is passionate about: boxing.

“I box at least 3-4 times a week. Pag may free time talaga ako, every day,” he says, as Men’s Health catches up with him during his training. “Ready to compete in the amateurs ako. Hindi lang puwede because of work. [But] pinipilit ko nga ang manager ko that I want to fight. I really want to fight.”

Lest you write Geoff off as basagulero or someone who is just out to throw some punches, he is quick to dispel that notion.

“I can brawl, but I’m a thinking fighter,” he says. “Boxing is a thinking man’s game. When you’re in the ring, ikaw lang mag-isa. Diskarte mo. Your corner is there to help you out, pero ultimately ikaw yung kailangang humarap dun.”

The statement could very well apply to the way he handles his career and his life: “Ang kailangan talaga is discipline. It’s up to you if you want to excel in whatever you’re doing. Kung ano ang ibigay mo while training, yun din ang makukuha mo.”

It is not easy to stay as dedicated as he is to keeping fit, but Geoff shares a very effective motivator: try looking at your old photos to remind you of how far you’ve come.

For details on how to join, visit www.menshealth.com.ph or grab your copy of the June issue of Men’s Health, available in newsstands, bookstores, and supermarkets nationwide.