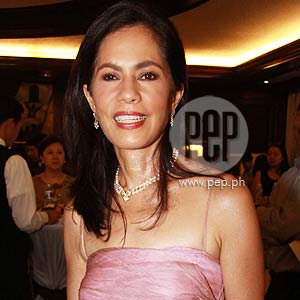 "I'm asking everyone to join us in all our projects and, we, together with the public, can make a difference," says Regina Paz Lopez, the managing director of ABS-CBN Foundation, Inc., which held its 20th anniversary celebration last Friday, July 3, at the Meralco Theater.

"It's a time of celebration and pride for us. Haping-happy ako kasi all of our partners are here," said ABS-CBN Foundation, Inc. (AFI) managing director Regina Paz "Gina" Lopez on seeing the big crowd that attended the Foundation's 20th anniversary presentation last July 3, at the Meralco Theater in Pasig City.

Ms. Gina Lopez thanked the various groups and companies that have consistently supported the Foundation—"From Bantay Bata to E-Media to Bantay Kalikasan, and now, the Pasig River to Bayan [Microfinance], marami, e. We have done all of these kasi everybody worked together."

She also encouraged everyone to start creating a better world for Filipinos. "Whatever happens, if every individual commits to work together in service, in compassion, in passion, whatever happens we'll still make a difference in this country," said the sister of Gabby Lopez, ABS-CBN Chairman and CEO.

PASIG RIVER CLEANUP. Since its inception in 1989, ABS-CBN Foundation has been serving the needs of Filipinos through its projects—E-Media, Bantay Bata, Bayan Microfinance, Bantay Kalikasan, Sagip Kapamilya, Bayanijuan, and Kapit Bisig Para sa Ilog Pasig, which is the latest undertaking.

"The project is very, very big. And if we're able to accomplish it, grabe talaga ang... I mean, the effect in the country would be amazing. I'm very, very passionate about the Kapit-Bisig. I wanna clean the river, e," she enthused.

Elaborating on the river project, Gina discussed the extent of their cleanup. "We are relocating 20 [residents] every week from Estero de Paco. By December, we wanna totally clean up the Estero de Paco. And we will be able to do it. That's why when you say, 'Wow! It looks so dirty now,' it includes working with the market vendors. The mayor is fully behind us and the two water companies," Gina related.

And this is just the beginning. Gina hopes that the effort will have a domino effect on the other rivers.

She said, "I feel that if we clean the Pasig river—there are 400 river system in the country—we show all other ways for the other systems. I have five community projects in Puerto Princesa, we are going to Sagada and to Bicol. We're still have all over the country, not just Metro Manila."

Again she enjoined everyone to participate. "Let's work together, let's make a difference, and let's make a commitment to this good life."

Gary Valenciano and Kuh Ledesma also shared the stage with their daughters Kiana and Isabella, respectively, in a very stirring number.

The program wrapped up with "Heal the World," a popular song of the late King of Pop Michael Jackson.