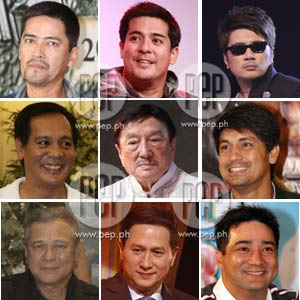 Situation-comedy series are a rarity these days, unlike in the late '80s to the '90s decade with shows that packed more than a hilarious 1-2 punch. PEP lists down these notable sitcoms.

Television sitcoms from the late '80s to the early '90s dominated the primetime and daytime slots of major networks and provided comic relief for people to rest from their daily problems. Back then, there were dubbed foreign telenovelas and only a few interesting home-brewed dramas, but most viewers turned to sitcoms with their featured rising stars. Shows such as Palibhasa Lalake, and Home Along da Riles included natural comedians and surprisingly made comedians out of its guest stars.

Time passed and new fads kicked in. Technology opened new doors for shows with special effects, offering the public more options. Sure, there are sitcoms still on TV today but only a few show originality or that one-liner that throws people in stitches. Fact is, the in thing nowadays are either Mexican telenovela remakes, fantaseryes, reality TVor primetime drama shows, especially if a pop actor/actress is in it.

Nothing wrong with these, of course, but what we miss right now are old-time values where one can just laugh at a very realistic situation portrayed by an equally realistic actor. With sitcoms, there are no bitin factors, half-baked special effects, or conversations you can't even understand (pashnea)—you turn off the TV with a satisfied smile and look forward to the next laugh in the forthcoming episode.

We PEP guys chewed on these thoughts while munching peanuts and cookies in the pantry last week. An enjoyable argument about which shows were the funniest led to the forlorn wish that one or all would come back to invade the airwaves at least once again. That may never come to pass, of course, but if networks (ahem!) would reconsider, PEP shortlisted the best TV sitcoms that left a hilariously lasting impression on the Pinoy masses. Every show listed below brought about guffaws, so it was quite difficult, albeit rewarding, to do a ranking.

Palibhasa Lalake (1986). Cafeteria Aroma may have paved the way for ad lib slapstick of the '80s but it was Palibhasa Lalake of the late '80s to the '90s that improved and even made ad lib more creatively hilarious. Who would ever forget the (then young) wacky bunch of Richard Gomez, John Estrada, and Joey Marquez? Their "script", sometimes composed mainly of one actor's real life situations was made fun of with wit and really cool punch lines.

Guests of the show had to beware because at the end, they got thanks for their participation with an unwanted bath, doused with a pail full of water. The only guests who were spared were Sharon Cuneta and Vilma Santos.

The pilyo factor added an interesting flavor to the already funny setting. The show's male stars had fun with the sexy female guests, turning an episode into one male viewer's guide on how to make a funny impression on girls. Such antics did not die out after Palibhasa Lalake, but lived on, though briefly, in the show Kool Ka Lang, where Joey Marquez once again starred with Raymart Santiago.

Home Along Da Riles (1992). Ah, Dolphy, the King of Comedy! His tried and tested comedic style never fails. The perfect marriage of poverty and wit is something nearly everyone can relate to with a laugh. As the title goes, the show's setting is nearly always among shanties lining the railroad tracks. Kevin Cosme (Dolphy) lives with his family in a shanty that shivers whenever the train thunders by.

Activists engaged in issues of poverty find no reason to laugh at this situation in real life. But the show's approach—"Laugh your worries away"—endears the humorous Kevin and his neighbors to the viewers. Through their wit and positive outlook on life, these characters embody the values of common folk, like dedication to finding work abroad to give the family a better life.

The rest of the cast include Nova Villa and the ever reliable Babalu, who together with Dolphy, mix comedy and life lessons in one package.

Ober Da Bakod (1992). This simple yet hilarious show brought tears of laughter over the characters' simple goal: To court girls from across the fence.

Brothers Mokong and Bubuli, played by Janno Gibbs and Anjo Yllana, face the uncommon problem poor young men have in courting two beautiful upper-class girls who live just a fence away. The persistence of the male dynamic duo in courting the girls is no match for their father Don Robert Dinero (Leo Martinez) who always seems to mess up the courtship plans. The poor brothers triumph at the end when Don Robert finds himself in a fix with the police over some plan he concocts. As the catch-phrase goes, "Sa presinto ka na lang magpaliwanag."

The good thing about this show is how different social classes meet and interact comfortably, sometimes romantically, despite the odds. Janno and Anjo's personalities are a good mix in portraying funny situations without overshadowing each other. They're both quite pleasing to watch.

Abangan ang Susunod na Kabanata (1991). Abangan is actually more than just slapstick, it's a comic satire on Philippine governance and politics. The show features ordinary citizens interacting with politicians—with hilarious results. Though not many would notice, Abangan shows the lighter side of politics, at the same time informing the public on the country's political situation.

Abangan stars Noel Trinidad as Anding Tengco, a corrupt congressman who would do anything just to get his hands on the presidency. His wife Barabara, who's crazy about drugs and shopping, is played by stage comedian Tessie Tomas. The comedienne made that famous gesture of biting her hand and flapping her fingers whenever she was wound up with tension.

Who would have thought that politics could be funny? Thanks to Abangan, people who would usually react negatively to corruption and other political dirt lightened up and just enjoyed reality via this show, however bitter-spicy.

Buddy en Sol (1990). The incongruous tandem of Buddy and Sol hit the boobtube with their fresh approach to portraying friends with different personalities that often clash whenever they are together. Manileño Buddy Salvador (Eric Quizon) and probinsiyano Sol (Redford White) spice up life as good friends who find themselves often mixed up in situations where wit and charm always prevail at the end.

There are no green jokes here, only pure wit and humor. Eric Quizon and Redford White make the perfect tandem for Buddy en Sol's aim to make us laugh while promoting the value of friendship.

OK Ka, Fairy Ko! (1987). The self-produced sitcom of Vic Sotto spawned over six movies four years after its debut on channel 13. The show broke new ground on Philippine television when it infused fantasy into comedy, combining real-life situations with oftentimes magical resolutions that ended up on a hilarious note.

OK, which looks similar to the popular U.S. sitcom Bewitched (1964), tells of mechanic Vicente Kabisote aka Enteng who marries Faye (Alice Dixson), a fairy princess from another world. Their lives turn from ordinary to extraordinary as Enteng clashes with his mother-in-law Ina Magenta (Charito Solis) and faces his new obligation to save the world from the forces of evil.

TV viewers got a good deal out of this show since it showcased special effects while retaining that HaHa factor without straying from the core value of the show—love for family.

Beh, Bote Nga! (1998) This show comes close to being a fantaserye and sitcom combined; it gives a refreshing taste by mixing comedy and magic ala OK Ka, Fairy Ko. However, Beh is an entirely different sitcom with a story that progresses with twists and turns up to the end.

Janno Gibbs as Kot and Anjo Yllana as Tot play brothers who eke out a living as scavengers. Thanks to their nasty landlady Aling Tweety (played by Tia Pusit), they have almost nothing left from their earnings. Their lives are made worse whenever they meet their rivals Tom (Jake Roxas) and Jerry (KC Montero) in the quest to win the love of two beautiful girls, Celine (Shermaine Santiago) and Dion (Aubrey Miles).

Aside from the laughs, the idea of working your way from the bottom is the main value instilled by the show. You don't actually need a genie to have your wish come true—wit and positive thinking amidst poverty can get you somewhere.

Oki Doki Doc (1993). Aga Muhlach is a heartthrob and he is usually the type of guy who would look good delivering romantic lines rather than punch lines. But, hey, his stint as a funny veterinarian paid off with this show. Thanks to the show's natural comedic cast including Babalu, Carmi Martin, and Roderick Paulate, Oki Doki Doc became one of the most sought-after sitcoms, primarily because of its wit and, of course, Aga.

Dr. Agaton Villaluz (Aga Muhlach) opens a small clinic for animals in a subdivision with hopes of earning enough to end his bachelor days by settling down with his family to-be. Due to events concerning his brother, however, the doc is obliged to take care of his pamangkins. Thus he becomes a father and mother in one. Adding to Agaton's worries is his assistant Godo (Jimmy Santos), who looks at himself as heartthrob more than a troublemaker slash veterinarian and creates more problems.

The show breaks away from safe formulas and introduces a funnyman in the form of a vet whose everyday concern is to take care of his pamangkins while looking for the love of his life.

PEPsters are welcome to discuss other sitcoms that did not make it to the list.