The Kapuso network celebrates its 59th anniversary with One Glamorous Night 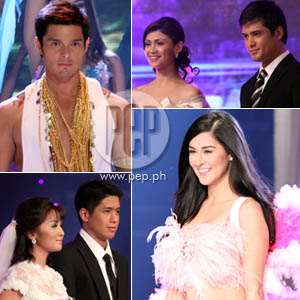 (Clockwise from top right) Carla Abellana and Geoff Eigenmann of Rosalinda; Marian Rivera of Darna; Kris Bernal and Aljur Abrenica of All My Life; and Dingdong Dantes of Stairway To Heaven are just some of the stars who graced the 59th annivesary special of GMA-7.

More than 100 Kapuso stars lit up the sky to celebrate GMA-7's 59thglorious anniversary. The grand event, titled One Glamorous Night: Greater and Grateful at 59, was held last night, June 19, at the Araneta Coliseum.

It was an evening of high style and glamour with the Kapuso stars parading in a flamboyant fashion show.

COLOR. Kyla and Jay-R opened the show with a colorful production number featuring the massive pool of more than 100 Kapuso talents.

The boys danced to the tune of Black Eyed Peas' "Boom, Boom, Boom" while the ladies gyrated to a samba medley. They later shared the stage for a fusion of the old and new dance moves.

STYLE. As presented by Raymond Gutierrez, this segment featured the glamorous portrayal behind the Kapuso network's image as represented by the roster of GMA's Kontrabidas as they introduced the idea of nostalgia of high glam.

IMAGE. Mike Enriquez introduced the segment which highlights the element of image, as represented by the most respected personalities of GMA News and Public Affairs, who exemplify hard work in delivering a comprehensive and balance reportage of the truths of the times.

SOUL. Dingdong Dantes was greeted by wild shrieks from his fans as he introduced the next segment focusing on the Kapuso network's principle of enriching the lives of Filipinos through superior delivery of news and entertainment.

POWER. This segment, as introduced by German Moreno, centers on the GMA's resident athletes and sports enthusiasts who stand for the element of power that radiates truth and beauty in modern times.

Senator Bong Revilla almost went unnoticed as he appeared on the stage before the end of the production number.

We were expecting boxing great Manny Pacquiao and basketball heartthrob Chris Tiu, hosts of Pinoy Records, to appear on this segment but they were nowhere to be found.

NUMBERS. Michael V provided the intro for this segment, where the element of numbers gave the chronological narration of GMA-7's 59 resplendent years in the broadcast industry, as represented by bridal fashion featuring the top Kapuso love teams.

REACH. Respected broadcaster Mel Tiangco provided the intro for the last segment, the element of reach which marks GMA-7's growth and development as it connects to Filipinos across the globe through its international channels: GMA Pinoy TV and GMA Life TV.

Leading the finale was none other than Asia's Songbird Regine Velasquez as she sang a medley of inspirational songs, while models wearing Filipiniana costumes designed by three Filipino designers walked the ramp followed by all the Kapuso stars.

After this, Sen. Bong Revilla provided the farewell message as all the GMA-7 executives, led by CEO and Chairman Atty. Felipe Gozon, joined the Kapuso stars on the stage.

It was understandable that most of the talents of Tito Dougs skipped the GMA anniversary presentation since it was the last night of the talent manager's wake at the Heritage Memorial Chapels, although some of his other talents, like Wendell Ramos and Ryan Yllana, still showed up at the Big Dome.

Richard Gutierrez, one of the biggest stars of the Kapuso network, was also spotted at Tito Doug's wake, along with parents Eddie Gutierrez and Annabelle Rama and sister Ruffa. Unknown to many, Richard was co-managed by the late talent manager, who was cremated today.

Paolo Bediones is reportedly in Australia for the taping of Survivor Philippines Season 2; Heart Evangelista is currently in the U.S.; Jolina Magdangal is in Hong Kong for a personal appearance; and Yasmien Kurdi and Nadine Samonte are in Dubai for a show.

SOME SIDELIGHTS. While waiting for his cue for the next segment, Ogie Alcasid gave probably one of the most entertaining moments of the program. Standing on the side of the stage for more than 10 minutes, Ogie entertained the audience and himself by singing a line or two of different songs while cracking jokes left and right. Too bad that this part won't be aired on TV.

Based on the applause and cheers last night, there is no doubt that Marian Rivera and Dingdong Dantes are still the most popular Kapuso stars. Coming in second is the pair of Aljur Abrenica and Kris Bernal, who will soon be seen in the primetime series All My Life.

Geoff Eigenmann and Carla Abellana looked really good together. But their appearance on stage did not elicit the same response as Dingdong and Marian or even Aljur and Kris, probably because the viewers have yet to see their chemistry on screen. But if everything works on their side, then their tandem will also become one of the most popular in no time.

Dingdong and Marian never appeared on stage together as they now have different projects, Darna for Marian and Stairway To Heaven for Dingdong. But during the finale, one of the country's most popular love teams made their entrance together.

One Glamorous Night: Greater and Grateful at 59 will be aired on June 28 on SNBO.