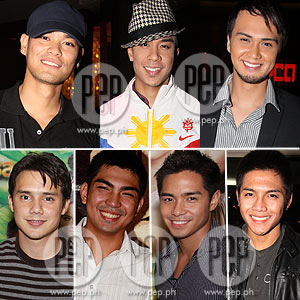 This is what people always say whenever they see a similarity between a father and his son. Of course, this happens because the kid either imitates what he sees from his father or the father passes some of his characteristics on to his child by giving him some pointers.

In time for Father's Day, PEP asked some local male celebrities about the lessons that their fathers shared with them and how these have helped them.

Billy Crawford. The International Pop and R&B sensation says that since he was a kid, his father taught him a lot of things about handling problems in life. He related to PEP, "He once told me when I was about 13 years old that there's no such thing as problems, there's only solutions. And I think that's, you know, dealing with politics, dealing with your career, dealing with love, relationships, whatever. I think it's a good, positive way of looking into life about... You know, wala talagang problema. Kahit anong sakit ng problema na yan, may solusyon para d'yan."

Jay-R. The Prince of R&B is very grateful to his dad for sharing some pointers about music. He said, "Lahat ng music ko galing sa kanila, so until now I apply it; siyempre, I'm a singer. All that came from my father and without him, I wouldn't be doing this na."

Kris Lawrence. The former Star in a Million grand winner says his father has taught him a lot of lessons in life. "But the most important, I think, is to save money," he told PEP.

Jace Flores. The Survivor Philippines castaway said he never got the chance to bond with his father, but he admitted his stepfather has always been there to fill what he misses from having a father. "Well, he taught [me] how to become [humble] kasi mayabang ako dati. Laki po ako sa States, so I admit na mayabang po ako dati. I guess having him as a father figure and also coming here to the Philippines humbled me more. I become a lot more humble here in the Philippines."

How about you, what's the most important lesson you learned from your father?