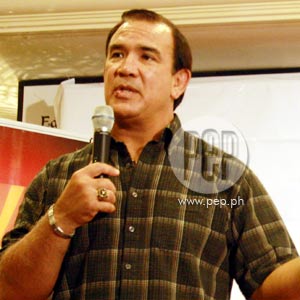 2009 WWE Hall of Famer Ricky "The Dragon" Steamboat promises that their July 10 show will be an "action-packed."

After three years since their last show in the Philippines, World Wrestling Entertainment (WWE) returns. This time, the are bringing in the pro-wrestling superstars of WWE brands, Smackdown, and ECW (Extreme Championship Wrestling) here for a one night only pro-wrestling extravaganza. It will take place at the Araneta Coliseum, tonight (July 10) at 7 pm.

Smackdown superstars like Edge, Chris Jericho, and Jeff Hardy, and ECW superstars Christian, Tommy Dreamer, and Gregory Helms are among the WWE superstars who will be entertaining their fans tonight with their explosive, daredevil moves, and flashy pro-wrestling abilities.

PEP (Philippine Entertainment Portal) caught up with 2009 WWE Hall of Famer Ricky "The Dragon" Steamboat during a press conference held by Solar Entertainment's JackTV for him yesterday, July 9, at the Batanes Room in Shangri-La Plaza Edsa Hotel. We got a preview of what to expect from the first WWE Smackdown and ECW Live in Manila show, plus some interesting insights and anecdotes about being a wrestler.

What can we expect from the matches at WWE Smackdown and ECW Live show?

Are there gonna be Filipinos performing with you guys there?

"What, you mean, Filipino wrestlers? Well, we've been doing a sort of an audition in the shows in different cities in States, where they will just go in there and wrestle and see what they have. It's a sort of an audition really, for us to see if they can work with us. But for this tour, no. It's just these guys. As for a Filipino wrestler, I know of one, a really good friend of mine, his name is Batista. Dave Batista. Big Dave. I really love that guy."

Speaking of Batista, how is he as a regular guy, behind that wrestler character of his?

"Oh, he's really nice. A friendly guy. Like I said, a really good friend of mine."

"Well, just recently, I had the chance to wrestle again. It was a long time since I last wrestled and I have been doing work behind the scenes in WWE. But just recently, during the silver anniversary of Wrestlemania, they were telling me, 'You were at the first Wrestlemania. And here we are again 25 years later...' I was asked, 'Can you still do it, diving off the ropes, doing the armdrags...can you do it for 20 minutes?'

"It became a sort of a personal challenge for me. I said to myself, 'I don't have to prove to anybody if I can do this stuff again...I can do it!' The next thing I knew I was out there wrestling again. And now, I'm making more appearances in the ring, only because of that. I never intended to go this way but I'm having fun with it. It feels good."

There are people claiming that wrestling is fake, pro-wrestling, that is. How do you react to that?

"What we do here is entertainment. But absolutely, nothing is fake. The moves that we do, the injuries that came with it. Nothing there is fake. I mean, I've had my share of injuries. I've had broken fingers, broken wrist, broken collar bone, my shoulders were separated four times, two separated ribs, I have two herniated discs at my lower back, but my hips and my knees are still good [laughs].

"And Batista, one of yours, we all saw it on TV. He had to have surgery in his arm because it was bent the wrong way, and we actually see the live surgery on TV, where they have to re-attach their bicep. It was live—right there in the operating table. So all of it are real."