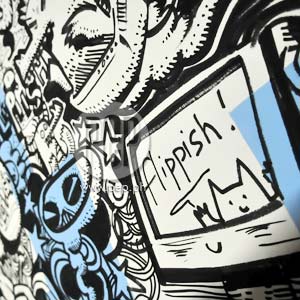 Last Thursday evening, July 2, the Metro heralded a new age in Philippine entertainment—television shows will not anymore be timebound and riddled with commercials. The country is now ready for Flippish.com.

The Website's launch party was typical of the online entertainment channel. At about 8 p.m., the doors of the Fiamma bar in Makati opened to welcome fans and supporters. A walk on the red carpet led them to a cool mural and to a photo op to showcase their hip and trendy fashion sense.

Some of the guests were even interviewed by hosts Eco Dela Sala and Roxanne Barcelo, known for their previous stint in QTV's business show Go Negosyo Bigtime, for the live online show. And with the help of media partners FHM and StyleBible.ph, Flippish may just be the coolest spot on the Web.

The jampacked event, which felt more like a family reunion by its cozy and friendly ambiance, was the official-launch party of the online channel, although it has been running already for more than six months. According to Chris Tan, the Flippish big boss, the channel may be the answer to today's dying television.

"Television is not going to be completely dead, but it will lose a little bit of it's power because of the Internet," he explained. "The Internet democratizes the power of media and that's the beauty of it. Right now, we're coming out with a TV network online. That's the whole idea behind [Flippish]."

The Flippish trailer, a two-minute video shown during the event, featured a collage of several exclusive Flippish shows like Direk, Girl Next Door, LSS, Shorties, The Event Show and Flippish Specials. The shows are refreshing takes on traditional boob- tube staples.

Moreover, two shows launched at the party hope to continue the Flippish trend. Weekend Warriors is a weekly travel show, while BrainFreeze features an experimental take on humor.

At the helm of the Flippish shows are five official ViPs, or video producers, that make sure the shows pass high standards. They are Jav Velasco, Chrina Cuna, Roman Carlo Olivarez, Dos Ocampo and Kring Elenzano.

But even with the bevy of talented people, would Flippish survive? ViP Chrina has something to say.

"At this point, we're running on passion talaga. But we know that because with this launch party, we really see big things for Flippish," she said optimistically.