Charice would have been part of Michael Jackson's London concert 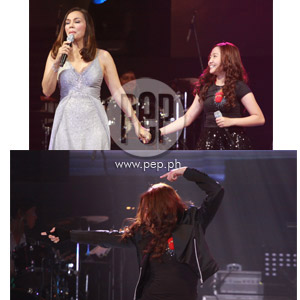 Kuh Ledesma (shown on left above) replaced Regine Velasquez in the June 27 concert of Charice held at the SMX Convention Center. Asia's Songbird reportedly had fever for the past two days.

Charice Pempengco has just completed her first major concert in the Philippines dubbed Charice: The Concert Begins. However, Regine Velasquez was unable to attend the June 27 concert held at the SMX Convention Center, SM Mall of Asia in Pasay City. Halfway through the concert, the young singer announced that Asia's Songbird was down with fever.

Kuh said that they practiced their duet at the last minute and she was impressed at how fast Charice learned the song. They then wowed the audience with their rendition of "Anak.

In her spiel, Kuh mentioned that Regine has been down with fever for the past two days.

MICHAEL JACKSON TRIBUTE. Another highlight of the concert was when Charice paid tribute to the late King of Pop. Wearing an all-black ensemble and a glove on her right hand, Charice moonwalked on stage and showed off some fancy footwork as she performed "Billie Jean."

She then proceeded to sing another MJ song: "You Are Not Alone."

The This is It concert series of Michael Jackson was to have taken place at the O2 Arena in London starting July 13.