FHM opens "university" for 100 Sexiest Women in the country 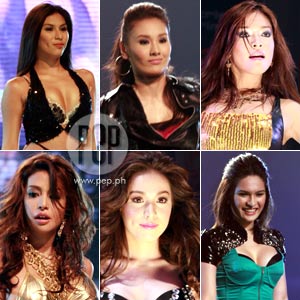 Campus life was never this tempting and colorful!

This is the most apt way to describe the victory party of FHM 100 Sexiest Women-dubbed as FHM University-which was held at the World Trade Center in Pasay City last July 9.

With more than 3,000 Pinoys in attendance, Hall A of the venue turned scorching hot, literally and figuratively. A long runway connected the two stages at both ends, thus giving the audience a clear view of the show, and the gratification they needed. Plus, there were booths which aimed to entertain and stimulate at the same time.

For the benefit of those who were absent from class, here's a rundown of what happened.

PRESENTING THE STUDENT BODY. FHM University officially opened at 9:50 p.m., with "headmistress" Rufa Mae Quinto welcoming the excited crowd. The audience was instantly captivated by her sexiness and sense of humor.

Rufa Mae also presented the various sponsors , which were referred to as "orgs," and their model-endorsers, who were given a few minutes of fame on the ramp. The one who earned the highest text votes will be featured in the August 2009 issue of FHM.

Rufa Mae's portion was brief, but she surely succeeded in intensifying the energey onstage.

After the headmistress, the council president, in the person of Jayme Joaquin, arrived. The Games Uplate Live host livened the show with her flirty spiels, and her outfits, from the cheer-leader costume to the purple backless number to the topless (a small whiteboard covered her breasts) attire.

At 10:36 p.m., actress Bangs Garcia, who placed 11th in the list, was the first of the 100 Sexiest Pinays to perform a dance number with the FHM Pep Squad. She was clad in a sequined yellow midriff blouse, a leather bikini skirt, and fishnet stockings.

Iwa Moto, who placed sixth, left the males enthralled by her charm and sex appeal. She was the perkiest actress to hit the stage, strutting on the catwalk with a big smile and waving to fans. The Filipina-Japanese actress danced to a hip-hop song wearing a pink sundress and black baby boots.

The next segment featured a roster of 20 female models, supposedly from the College of Miscommunication, who modeled edgy and postmodern swimsuits.

Temperatures rose at 11:31 p.m. when hot momma Aubrey Miles swam out of a pink sea of cloth to perform Justin Timberlake's "Like I Love You." With her checkered skirt, black and white blouse, fishnet stockings and white strap boots, she looked like a Barbie cheerleader. She is also the magazine's cover girl this month.

Sweet-faced Pauleen Luna showed off her curves and dancing prowess with the Black Eyed Peas' "Pump It." The Eat Bulaga! host, who wore a green blouse, tight black pants, and black boots, gave a wholesome yet irresistible performance. She represented the ladies from the School of Femme Arts who paraded their abstract yet still alluring swimming attires.

FHM sex guru Paloma was the first celeb to wear a gold string two-piece bikini. Gyrating to the tune of Disturbed's "Down With the Sickness," she kept the guys' eyes glued onstage.

Noticeably absent were Marian Rivera (3rd), Angel Locsin (4th) and Katrina Halili (5th), who snagged the first place for the past two years.