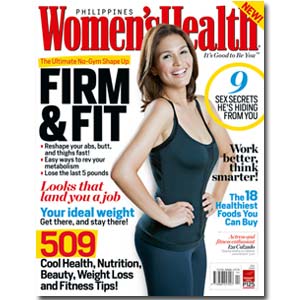 Women everywhere utter three words when the topic of losing weight comes up: "It's so hard!"

Iza Calzado is no exception, and she knows first-hand just how hard losing weight can be.

Overweight as a teenager, Iza went on crash diets to lose 80 pounds in just one year. Her weight has been seesawing since then, prompting her to acknowledge, "My body has been through so much." She shares her battle with weight-loss as she graces the cover of Women's Health Philippines this July.

It was only this year that Iza chose to actively do something about it, as she tells Women's Health, "When I finally realized I was gaining weight, I vowed to do something about it—the right way." She started by making adjustments in her diet: Avoiding carbs and choosing to snack on yogurt, fruits, and nuts.

Iza also shares that the key to a successful diet is to moderate what you eat, even on cheat days. "Don't pig out the whole day," she advises, "I still portion out my food because every bit counts." But there is one thing she cannot completely cut from her diet—sweets. While she indulges her sweet tooth once in a while, she says, "I don't eat sweets more than twice a week, because otherwise, it becomes a habit again. That's how I've done it all these years."

Aside from making smarter food choices, Iza also found herself falling in love with running early this year. "When I read an article on how participants on The Biggest Loser lost all their weight while training for a triathlon, I thought, 'Wow, what an awesome idea!'" Iza says, "Luckily, I had good friends who were into running and they convinced me to join them."

Her love for running makes her the perfect cover girl for the July issue of Women's Health, a Running Special.

Get more fitness tips from Iza and be inspired to lead a healthy lifestyle by grabbing your copy of the July issue of Women's Health, available in newsstands, bookstores, and supermarkets nationwide at P125 per copy.