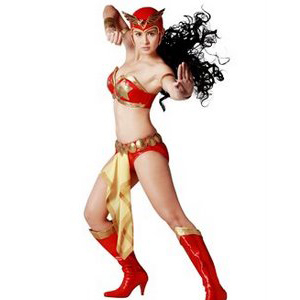 Before Marian Rivera, there were other actresses and actors—yes, you read it right, actors—who played the most p0pular Pinoy superheroine. Read on to learn who they were.

As the month of August nears, so is the most-awaited return of the original Pinoy superhero Darna, to be played by GMA-7's most bankable female star Marian Rivera.

Originally, Darna was known as Varga. Ravelo wrote and illustrated Varga for Bulaklak, appearing first on the magazine's No. 17, Vol. 4 (July 23, 1947) issue. A falling out with some of the magazine's editors caused him to resign from Bulaklak and transfer to Pilipino Komiks, where he re-launched his superhero. Ravelo renamed her Darna, anagram of the superhero's mortal alter-ego Narda. Darna's adventures in Pilipino Komiks began on the No. 77 (May 13, 1950) issue. Another komiks legend, Nestor Redondo, illustrated Darna this time.

There were claims that Darna was a copy, or less-charitably, a rip-off of William Mourton Marston's Wonder Woman, who first appeared on the No. 8 (December 1941) issue of All Star Comics. But people who have spoken with Ravelo personally claimed that the Filipino comics legend based Darna on his own mother who raised him single-handedly.

They also claimed that Ravelo's inspiration for Darna's heroic qualities came from his childhood fascination with Jerry Siegel and Joe Shuster's Superman (first appearance on Action Comics, No. 1, June 30, 1938). The Pinoy superhero's ability to change from Narda to Darna, was inspired by C.C. Beck and Bill Parker's Captain Marvel (first appearance on Whiz Comics, No. 2, February 1940), who changes from the young boy Billy Batson to Captain Marvel by shouting, "Shazam!"

Darna became such a hit among Filipino komiks fans, mainly the masa of society, that by 1951, actor-director-producer Fernando Poe Sr. directed and produced the film version of Darna for his Royal Films outfit. Darna, the movie, was a smash hit.

The first actress who played Darna was 1950s movie queen Rosa del Rosario. Since then, a slew of actresses and actors—yes, you read it right, actors—have portrayed the most popular Pinoy superhero, not only in movies but also on different platforms.

Darna is the only local superhero that has been played a total of 14 times in movies, four times on TV, thrice on stage and twice in TV commercials.

ROSA DEL ROSARIO. Regarded as the "The Original Queen of Philippine Movies," Del Rosario started her career at the tender age of 12 in the 1930s during the Silent Movies Era. She had her first starring role via Jose Nepomuceno's Ligaw na Bulaklak (1932). In 1951, she was approached by Fernando Poe Sr.'s Royal Films to play Ravelo's Darna.

In Eric Cueto's interview with her in the Official Mars Ravelo Darna website (www.marsravelodarna.com), she revealed that in her flying scenes in Darna, she was actually flying over Quiapo with the aid of a helicopter. She was suspended in the air with help of cables attached to her body and the helicopter. All her flying scenes were shot at night to hide the cables. She nearly crashed on Quiapo church in one of her flying scenes.

EVA MONTES. Another People's Pictures Inc. production, Darna at Ang Babaing Tuod (1964) starred then newcomer Eva Montes. Cirio H. Santiago, who eventually became one of the most influential Filipino directors here and abroad, directed this first Darna movie in full color. This was the first Darna version in gold bikini and red-trimmed costume (traditionally, Darna wears red bikini with gold stars and winged insignia). This was also the only Darna movie that focused more on the villain than on the hero. Darna appeared in the movie only three times.

In one of her later interviews, Eva revealed that this was because Gina Alonzo, who played the villain Lucilla, ang Babaing Tuod, was being groomed by People's Pictures, Inc. to be its next big star.

GINA PAREÑO. Darna at ang Planetman (1969) was Vera Perez Productions' own version of Darna. This time she wore a blue bikini with red stars. By then, Ravelo had added another character to his Darna universe, Daria.

Daria was another alter-ego of Darna, a grown up version of Narda. In the movie, Gina Pareño played both Darna and Daria, while Narda was played by the young Gina Alajar. Darna also fell in love for the first time in this movie. She fell for a man who turned out to be the Planetman whom she had to defeat.

VILMA SANTOS. Sine Pilipino got then hot young star Vilma Santos to essay the role of Darna. But the problem was, Vilma was hesitant to wear the two-piece costume. So, during their photo shoot for the publicity photos of the new Darna movie, she wore the Darna costume on top of her body stocking.

Vilma was finally convinced by producers Douglas Quijano and William Leary to lose the body stocking and wear just the costume on the day of the press conference. The press people were surprised on seeing how sexy Vilma was in her Darna costume, which was back to the original red bikini and gold stars.

Lipad, Darna, Lipad! (1973) is the first and only trilogy of the superheroine. It was a box-office hit on its first day of showing and considered a turning point in Vilma's career. It was also the first Darna movie where Darna and Narda was played by the same actress. Unfortunately, there is no existing copy left of this classic film.

Vilma starred in three more Darna films: Darna and the Giants (1974) and Darna vs. the Planetwomen (1975), which were both under Tagalog Ilang-Ilang Productions, and Darna and Ding (1980) under Niño Muhlach's D'Wonder Films.

Darna and the Giants was the continuation of Vilma's first Darna movie and Darna again wore the gold bikini costume, while Darna vs. the Planetwomen was a rebooted version of the Darna origin, with Vilma's Narda this time portrayed as a crippled teenager who was given a magical stone by a mysterious source. The costume is back to red this time with the stars on Darna's bra also colored red and the headpiece, all gold.

Darna and Ding was the last time Vilma played Darna. Her costume this time was sexier and more revealing. In this movie, she was joined by Ding who now has his own superpowers.

CHIQUITO. He was the first male Darna in Philippine movies. In Vilma Santos's movie Terribol Dobol (1974), he played the superhero in a short scene.

Chiquito was considered the arch-rival of Comedy King Dolphy, who later on also played Darna.

LORNA TOLENTINO. In 1977, Kitchie Benedicto of KBS-9 created Darna the TV Series with then young actress Lorna Tolentino as Darna / Narda. Also in this TV version, Darna wears a one-piece costume, instead of a two-piece, for the first time.

DOLPHY. In 1979, Regal Films made a spoof of the Darna movies titled Darna Kuno?. In this movie, there were actually three Darnas—Dolphy, Brenda del Rio (who gave the magical Darna stone to Dolphy, after getting pregnant by Mazinger Z and Voltes V) and Lotis Key.

RIO LOCSIN. A few months after Dolphy's Darna parody, MBM Productions presented its own Darna movie, Bira Darna Bira! starring Rio Locsin. This is the only Darna movie that did not do well in box-office. Darna's costume in this movie now included a choker. Narda also became a high-class model in this movie.

NANETTE MEDVED. Half-Russian, half-Filipina actress Nanette Medved essayed the Darna role in this Viva Films version of the superhero in the movie Darna (1991). Nanette portrayed her Darna with reference to Wonder Woman's ability to block bullets with her bracelets. This started the accusation that Darna was a Wonder Woman rip-off.

Darna's costume was also altered in this movie. From the helmet that Darna used to wear in past movies, she now wore a tiara with wings. She had two brothers in this movie, Ding and Dong.

ANJANETTE ABAYARI. After appearing in a TV commercial for an automobile company as Darna (with fellow beauty queens Alma Concepcion and Daisy Romualdez, both also wearing Darna costumes), balikbayan and dethroned Bb. Pilipinas-Universe 1991 Anjanette Abayari was chosen by Viva Films to play its latest version of Darna in Darna: Ang Pagbabalik (1994). Instead of wings on the tiara, this Darna had two leaves entwined for a head piece.

REGINE VELASQUEZ. In the Premiere Productions remake of Captain Barbell in 2003, starring Ogie Alcasid and Ramon "Bong" Revilla, Asia's Songbird, Regine Velasquez made a cameo appearance as Darna. She wore the costume again onstage in her and Ogie Alcasid's concert tour The Songbird and the Songwriter Concert Tour in 2004.

ANGEL LOCSIN. In 2005, GMA-7 tapped Angel Locsin to play Darna after the success of the TV series Mulawin (2004) where she played one of the lead roles. Angel's Darna portrayal made TV history when it registerered a 52.1 percent rating (according to the data gathered by market research company AGB) on its fourth episode, making it the highest-rated episode by a primetime show at the time.

A lot of changes were incorporated in this new version of Darna. Although the story followed the original version's storyline on how the young Narda found a mysterious magical stone, it was only when Narda turned 18 that she became Darna. Also, this TV version of Darna followed the 2003 Mango Comics version, as far as Darna's roots and her enemies were concerned.

Katrina Halili also wore a Darna costume in this show. She wore the costume of Angel's Darna's enemy, Black Darna. As the name implies, her costume was all black and gold.

MARIAN RIVERA. Flying soon is Marian Rivera as Darna/Narda. It was April of this year when GMA executives announced Marian as the next Darna. Marian went through rigid physical and mental training for her role and also started to train in the Chinese martial art wushu. She is currently taping pilot episodes for the 2009 TV version of Darna.

Darna was also portrayed in ballet productions. First by prima ballerina Lisa Macuja-Elizalde in Comics Ballet (1997) and alternately by Kristine Crame and Kris Belle Paclibar in Darna: The Ballet (2003).

So there you have it! All the Darnas you need to know.