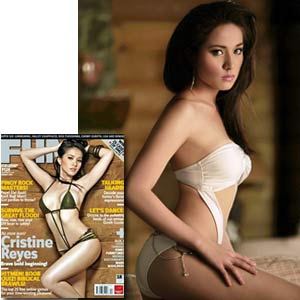 Cristine Reyes topped this year's FHM Sexiest Women in the World list after garnering a total of 382,819 votes.

It's official: Cristine Reyes has taken the crown as this year's FHM Sexiest Woman in the World. Cristine, who made her FHM debut in August 2007 when she graced the cover of the magazine, bested 99 other hotties in the list as she garnered a total of 382,819 votes.

Trailing her in second place is last year's winner Marian Rivera, with 282,300 votes. Angel Locsin follows in third place with 266,233 votes, while Katrina Halili withstands controversies by coming in at fourth with 238,558 votes. Iwa Moto rounds up the Top 5 with 220,945 votes.

Transformers 2: Revenge of the Fallen star Megan Fox remains as the FHM Global Winner, the second consecutive year that she has been voted into the top spot by all FHM editions worldwide.

This year's FHM 100 Sexiest Women in the World poll garnered more than 2 million votes, an all-time high for the No. 1 men's magazine in the country. Readers made their votes count by sending in actual ballots and logging on to www.FHM.com.ph to vote for their favorite FHM babe.

Find out if your favorite FHM babe is among this year's FHM 100 Sexiest Women in the World by grabbing your copy of the July issue, featuring FHM comeback queen Aubrey Miles on the cover.

FHM is available in newsstands, bookstores, and supermarkets nationwide. For more of FHM online, visit www.FHM.com.ph.