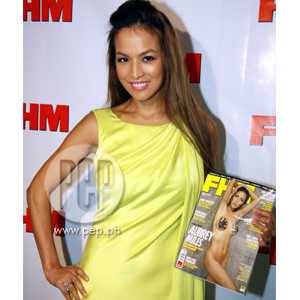 Aubrey Miles wasted no time reminding everyone why she is one of FHM Philippines' certified icons.

The July 2009 issue of the popular men's magazine showed the sexy mother of two wearing nothing but hand-shaped mud to cover her breasts. FHM editor-in-chief Allan Madrilejos acknowledged that having Aubrey—now a three-time cover girl—back on the magazine's cover made this month's issue extra special, leading to the annual 100 Sexiest Women in the World event, which will be held on July 9 at the World Trade Center in Pasay City.

"My first-ever magazine cover was with FHM, so that's my launching. My second is the 50th anniversary Gold issue nila. Now the third one is July, which is they have it together with the 100 Sexiest, so I feel kinda special. I'm not saying 'yong mga ordinary issues are not [special]. Pero what I'm saying is for me, parang I feel good na may mga special event pag nilalabas nila 'yong mga cover ko," Aubrey told PEP (Philippine Entertainment Portal) in an interview at the Kamayan/Saisaki/Dad's restaurant in Greenhills in EDSA earlier today, July 1.

ONE HOT MAMA. Aubrey's whistle-bait figure as splashed on the magazine cover doesn't betray at all that she's already a mother. The comebacking sexy actress—who gave birth to son Hunter Cody Miller, courtesy of longtime boyfriend Troy Montero on October 3, 2008—has a lovechild with ex-flame JP Obligacion.

"This is actually my way din to show to all the moms there that if I can do it, you can [also] do it. And also na you get better after all the challenges, after lahat ng napagdaanan mo inside and out, and then kapag maganda 'yong na-develop mo inside is lumalabas outside. Like 'yong determination ko to lose weight, ito 'yong result in eight months after giving birth. Parang kung kaya mo, kaya ko, kaya nila."

"You know what, it's really different, e, you get more parang open- minded and then you started being considerate sa ibang tao. Babies keep you grounded, it keeps you humble. Naging matured ka but still you're learning, still learning, learning process, e. Ngayon, I'm happier," she said.

The arrival of Hunter likewise strengthened the bond between Aubrey and Troy. "Mas deeper ang relationship namin and we support each other more. No competition between us, walang jealousy. So ano lang kami talaga, parang puzzle kami, parang ganun, we matched."

Aubrey announced that she will have a special production number at the FHM Sexiest Women in the World event next week.